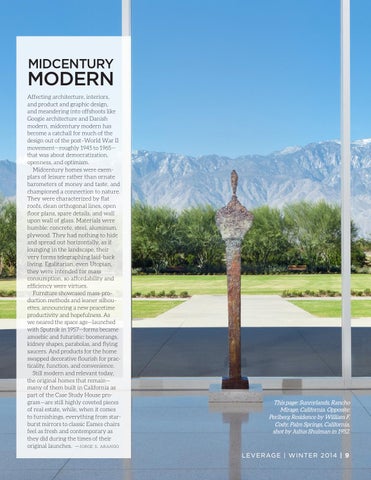 MODERN Affecting architecture, interiors, and product and graphic design, and meandering into offshoots like Googie architecture and Danish modern, midcentury modern has become a catchall for much of the design out of the post–World War II ­movement—roughly 1945 to 1965— that was about democratization, openness, and optimism. Midcentury homes were exemplars of leisure rather than ornate barometers of money and taste, and championed a connection to nature. They were characterized by flat roofs, clean orthogonal lines, open floor plans, spare details, and wall upon wall of glass. Materials were humble: concrete, steel, aluminum, plywood. They had nothing to hide and spread out horizontally, as if lounging in the landscape, their very forms telegraphing laid-back living. Egalitarian, even Utopian, they were intended for mass consumption, so affordability and efficiency were virtues. Furniture showcased mass-production methods and leaner silhouettes, announcing a new peacetime productivity and hopefulness. As we neared the space age—launched with Sputnik in 1957—forms became amoebic and futuristic: boomerangs, kidney shapes, parabolas, and flying saucers. And products for the home swapped decorative flourish for practicality, function, and convenience. Still modern and relevant today, the original homes that remain— many of them built in California as part of the Case Study House program—are still highly coveted pieces of real estate, while, when it comes to furnishings, everything from starburst mirrors to classic Eames chairs feel as fresh and contemporary as they did during the times of their original launches. —jorge s . arango

Presenting the debut issue of Leverage Lookbook, the guide to global trends in real estate, design, culture, and lifestyle. From insider tours of stunning luxury homes across the world to the finest home furnishings and city guides, we have you covered. 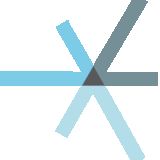