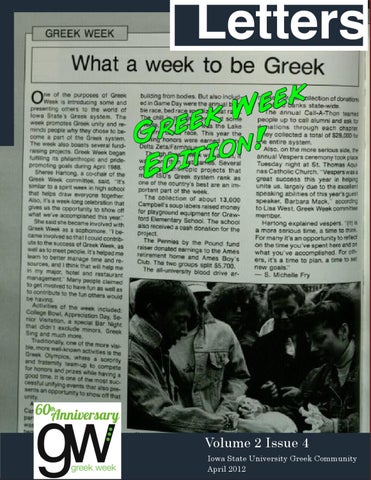 but Greek Letters are Still in Style!

Greek Getaway which was the Fraternity Fair held at Lied Recreation Center Saturday morning. This allowed the organizations to showcase their involvement on campus and different aspects about their chapter to the potential new members.

The CPC Vice Presidents of Recruitment, Samantha Stonehocker and Katie Henry, attribute the success of the weekend largely to the Greek calling project, the “Why Not?” marketing campaign, and the Gabby Greek Facebook page – a persona of the Greek Community that can be ‘friended’ and can answer questions about Iowa State Greek Life.

“We got the chance to offer opportunities to learn more about our Greek Community and get an in-depth look at Greek Life here at Iowa State,” said IFC VP of Recruitment Evan Todtz.

“Greek Getaway is a really great way for people to be Greek for a day,” Katie said. “A lot of people come in with stereotypes in their minds and this is a great way to show them who we are.”

At the end of Greek Getaway the women already started to sign up for Formal Recruitment in the fall, and the majority of the 253 men that attended got asked back to chapters on Sunday afternoon. “Greek Getaway will continue to get bigger and better each year,” said Sam.

In order to accomplish just that, Greek Getaway participants listened to the Greek 101 session on Saturday. The participants could text in their questions about Greek life to a panel of students. Katie noted that one of the more common questions was if being Greek was like the movies or television shows. Some of the women at Greek Getaway also went to a viewing session done by Alpha Sigma Kappa and Phi Beta Chi that introduced chapters without facilities. It was met with positive feedback and helped to generate more interest and awareness. The Interfraternity Council (IFC) Vice Presidents of Recruitment Joe Nobile and Evan Todtz oversaw the men’s portion of

A total of 116 laps were ran around sorority circle between Road Rally & Bed Race!

At 255 calories a donut, a total of 10,965 calories were consumed during Dingle Dangle Donut!

During the Greek Week Olympics many chapters attended the Greek Pizza Lunch Philanthropy to help raise money for the United Way of Story County. The lunch had over 1,100 people in attendance, raising $5,700 for the cause. “Overall the event went really well,” said Olivia Gaudineer, Collegiate Panhellenic Council Vice President of Philanthropy and Community Service. “We (had) tons of support from the chapters and Potential members.”

Polar Bear Plunge Sigma Nu raised the most money estimating close to $13,000. The pairing of Delta Delta Delta, FarmHouse and Alpha Sigma Phi pairing had the highest participation at Polar Bear Plunge and ultimately won Greek Week overall. Polar Bear Plunge was held during Greek Week on March 31st. This year was a recordbreaking event not only for the Greek Community, but it was recorded the largest plunge in Special Olympics history. The Greek Community raised over $92,000 for Special Olympics Iowa, making this the highest amount ever raised. 1,400 Greek students registered to fundraise for the event and over 900 Greeks actually plunged into the chilly Lake LeVerne on Saturday. The pairing of Gamma Phi Beta, Sigma Phi Epsilon and

2nd Annual Meal Under the Campanile Shows Growing Success BY Mary Kate Burkert “I think this year the Emerging Greek Leadership Council did an amazing job with advertising [for the event],” said Elizabeth Pritchard, co-president of the Emerging Greek Leadership Council along with Zach Lenhart. “There was not a day that went by in the final week without having a status, tweet or comment about Meal Under the Campanile. Both the Interfraternity Council and the Collegiate Panhellenic Council helped with advertising and allowed us to have an excerpt in Letters which was so awesome!”

Amid Greek Week competition and friendly rivalry, the Greek Community united March 28 to participate in the second annual “Meal Under the Campanile” fundraiser to benefit the Ames Emergency Residence Project.

“I attribute the success of Meal Under the Campanile to all of the hard work and passion the members of EGLC put into the event,” said Megan Jensen, Vice President of Membership Development for the Collegiate Panhellenic CounciI. “I could not have been happier with the turn out and I am so pleased that students of not only the Greek Community, but the Iowa State campus as well came out to support the Emergency Residence Project.”

$3,033.20 was raised for this cause which provides meals, shelter and intervention services to those in need. About 900 Greek students attended the event hosted by the Emerging Greek Leadership Council (EGLC). The meal included pulled pork sandwiches and a vegetarian option of a Panera bagel or veggie burger with chips, cookies, water, lemonade and Red Bull to power through the week. Extra food from the meal was donated directly to the Ames Emergency Residence Project and the Ames Soup Kitchen. Greek Week karaoke held on Central Campus during Meal Under the Campanile kept attendees laughing throughout the afternoon.

By Bayley Rustad The Greek community played a major role in helping make this blood drive such a great success. Not only did Greeks donate blood in the drive but they also donated their time for a Greek Week points, extra credit, or just giving back to a great cause. During the Blood Drive this year, over 1,000 Greeks volunteered at the blood drive escorting donors, assisting the blood centers with registering donors, as well as advertising the blood drive across campus and being a part of the Blood Drive committee. Another way that the Greek community helped the Blood Drive was providing cookies for donors to snack on after they donated.

Cory Bryant, one of this year’s Blood Drive directors and a member of Delta Tau Delta fraternity said, “Overall, The Iowa State University Spring 2012 Blood Drive was according to the numbers, Greeks play an extremely held in the Great Hall of the Memorial Union March 19th important role in the success of the drive.” to 22nd. The annual blood drive was a perfect way to Blood drive facts: kickoff Greek Week, giving Greeks a chance to start -2270 donations competing with other Greek Week pairings while still -890 Greek donations giving back and making an impact in the community. -1017 Greek volunteers This year was one of the most successful blood drives Iowa State has had in the past four years with a total -1918 Greek participants of 2,270 donors 890 of these donors were Greek members. Each donation given has the opportunity to save three lives. Tom Yung, a member of Delta Tau Delta fraternity, has donated several times and he says he continues to donate because “It helps to save lives in the most direct way possible, with little to no effort to those donating. There is something about the potential of saving up to three lives that really hits home, especially if you know anyone that died too early.” 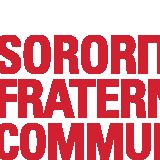 The special edition of the Iowa State University's Greek Week 2012!

The special edition of the Iowa State University's Greek Week 2012!