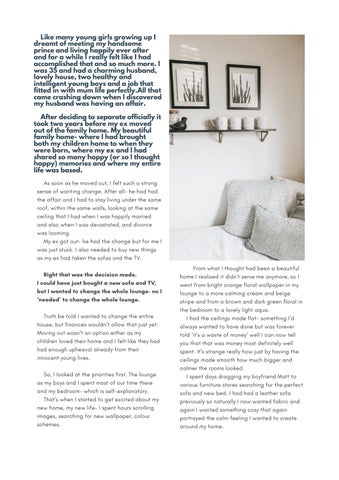 Like many young girls growing up I dreamt of meeting my handsome prince and living happily ever after and for a while I really felt like I had accomplished that and so much more. I was 35 and had a charming husband, lovely house, two healthy and intelligent young boys and a job that fitted in with mum life perfectly.All that came crashing down when I discovered my husband was having an affair. After deciding to separate officially it took two years before my ex moved out of the family home. My beautiful family home- where I had brought both my children home to when they were born, where my ex and I had shared so many happy (or so I thought happy) memories and where my entire life was based. As soon as he moved out, I felt such a strong sense of wanting change. After all- he had had the affair and I had to stay living under the same roof, within the same walls, looking at the same ceiling that I had when I was happily married and also when I was devastated, and divorce was looming. My ex got out- he had the change but for me I was just stuck. I also needed to buy new things as my ex had taken the sofas and the TV.

From what I thought had been a beautiful home I realised it didn’t serve me anymore, so I went from bright orange floral wallpaper in my lounge to a more calming cream and beige stripe and from a brown and dark green floral in the bedroom to a lovely light aqua.

Truth be told I wanted to change the entire house, but finances wouldn’t allow that just yet. Moving out wasn’t an option either as my children loved their home and I felt like they had had enough upheaval already from their innocent young lives.

I had the ceilings made flat- something I’d always wanted to have done but was forever told ‘it’s a waste of money’ well I can now tell you that that was money most definitely well spent. It’s strange really how just by having the ceilings made smooth how much bigger and calmer the rooms looked.

So, I looked at the priorities first. The lounge as my boys and I spent most of our time there and my bedroom- which is self-explanatory. That’s when I started to get excited about my new home, my new life- I spent hours scrolling images, searching for new wallpaper, colour schemes.

I spent days dragging my boyfriend Matt to various furniture stores searching for the perfect sofa and new bed. I had had a leather sofa previously so naturally I now wanted fabric and again I wanted something cosy that again portrayed the calm feeling I wanted to create around my home. 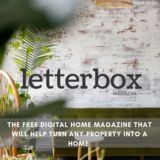