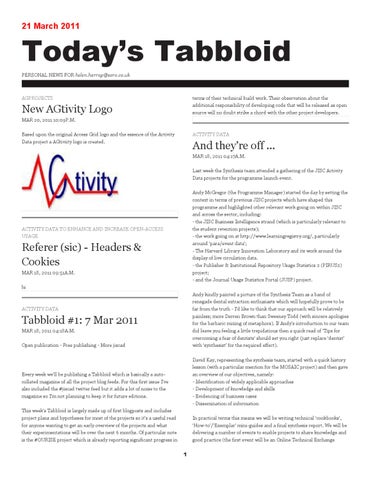 terms of their technical build work. Their observation about the additional responsibility of developing code that will be released as open source will no doubt strike a chord with the other project developers.

New AGtivity Logo MAR 20, 2011 10:09P.M. Based upon the original Access Grid logo and the essence of the Activity Data project a AGtiviity logo is created.

And they’re off ... MAR 18, 2011 04:17A.M. Last week the Synthesis team attended a gathering of the JISC Activity Data projects for the programme launch event. Andy McGregor (the Programme Manager) started the day by setting the context in terms of previous JISC projects which have shaped this programme and highlighted other relevant work going on within JISC and across the sector, including: - the JISC Business Intelligence strand (which is particularly relevant to the student retention projects); - the work going on at http://www.learningregistry.org/, particularly around ‘para/event data’; - The Harvard Library Innovation Laboratory and its work around the display of live circulation data. - the Publisher & Institutional Repository Usage Statistics 2 (PIRUS2) project; - and the Journal Usage Statistics Portal (JUSP) project.

Andy kindly painted a picture of the Synthesis Team as a band of renegade dental extraction enthusiasts which will hopefully prove to be far from the truth - I’d like to think that our approach will be relatively painless; more Derren Brown than Sweeney Todd (with sincere apologies for the barbaric mixing of metaphors). If Andy’s introduction to our team did leave you feeling a little trepidatious then a quick read of ‘Tips for overcoming a fear of dentists‘ should set you right (just replace ‘dentist’ with ‘synthesist’ for the required effect).

David Kay, representing the synthesis team, started with a quick history lesson (with a particular mention for the MOSAIC project) and then gave an overview of our objectives, namely: - Identification of widely applicable approaches - Development of knowledge and skills - Evidencing of business cases - Dissemination of information

Every week we’ll be publishing a Tabbloid which is basically a autocollated magazine of all the project blog feeds. For this first issue I’ve also included the #jiscad twitter feed but it adds a lot of noise to the magazine so I’m not planning to keep it for future editions. This week’s Tabbloid is largely made up of first blogposts and includes project plans and hypotheses for most of the projects so it’s a useful read for anyone wanting to get an early overview of the projects and what their experimentations will be over the next 6 months. Of particular note is the #OURISE project which is already reporting significant progress in

In practical terms this means we will be writing technical ‘cookbooks’, ‘How-to’/’Exemplar’ mini-guides and a final synthesis report. We will be delivering a number of events to enable projects to share knowledge and good practice (the first event will be an Online Technical Exchange

taking place in the first week of April). We’ll also be a source of information and advice through the live synthesis that takes place here on this blog, and developing online advice/FAQs via Quora. Finally we’ll be gathering project knowledge and artefacts into a space online, around which a Community of Practice can draw together.

The final session of the day was a synthesis of the days discussions, which will form the basis of a near-future blogpost here.

JISCAD - TWITTER SEARCH All of the 9 Activity Data projects had a presenting slot so that they could share the hypothesis that sits at the core of their project and as much other information as they could cram into the 5 minutes they were allotted. This gave projects the opportunity to start making connections between their projects and identify potential areas of overlap in terms of scope and technical challenges.

The rest of the day was spent particpating in interactive sessions which were useful in revealing further details about the projects and other areas of overlap/shared pain. Mark van Harmelen led a session on identifying the key technical challenges faced by projects and the key technical benefits that they will potentially be delivering back to the programme and to the wider community. You can see from the photo below that this resulted in a proliferation of post-it notes which were placed in their ‘natural’ groupings and ocassionally fluttered to the floor in a most delicate manner. Mark collected all of the post-its and plans to produce a document that shows the groupings which emerged.

In the afternoon the project representatives were asked to identify the key IPR challenges their projects face. The discussions on our table reflected some of the other groups and centred around the issue of establishing ‘robust anonymity thresholds’ (or ‘the magic number’) for any data that will be released (both internally and externally to the institution). Tom Franklin ran the last interactive session of the day which was an exploration of the projects’ business case. His definition of a business case as “something you need in order to get money from someone who doesn’t want to give you money” seemed a particularly useful way of keeping the correct audience for the business case in mind (i.e. the person with the money, not the person who wants to get hold of the money).

Further analysis of Huddersfield's book loan data by @mikecane http://t.co/FIB1RBd #jiscad Must make some time to update the data set

Just to clarify, the further analysis is by “crshalizi” and thanks to @mikecane for tweeting about it :-) #jiscad

Me too! RT @daveyp: Heading back to Huddersfield from the #jiscad #salt11 project meeting — really excited about the possibilities :-)

@ConstanceM There should be a dedicated blog for the project soon. At the moment, there's http://bit.ly/h8T39j #jiscad #salt11

Heading back to Huddersfield from the #jiscad #salt11 project meeting — really excited about the possibilities :-)

Ooops — I appear to have a doughnut stain on my #jiscad #salt agenda :-S Hope that won't create the wrong impression at the meeting

RT @daveyp: Fascinating blog post about HarperCollins by @gluejar http://bit.ly/eeWhsX Many thanks to Eric for playing with our circ data! #jiscad #lipd

Hypothesis MAR 14, 2011 05:13P.M. LIBRARY IMPACT DATA PROJECT UCIAD is a relatively small, experimental project looking at how semantic technologies can help the user-centric integration, analysis and interpretation of activity data in a large organisation. As such, as suggested also to all the other projects in the JISC Activity Data programme, it relies on a central hypothesis that will hopefully be verified through the realisation and application of our software platform. But before we can express this hypothesis, we need to introduce a bit of background. Especially, we beed to get back to what we mean by “usercentric”.

Our first project team meeting MAR 16, 2011 01:13P.M. On Friday the 11 March, all 8 project partners met for the first time. In a packed agenda we discussed the project in detail – we’ll be blogging the minutes soon. We also approved the project plan and discussed the hypothesis in some detail – look out for our first blog on that soon too! We are now working on getting the focus group questions out to everyone in the next few days.

To put it simply, a user-centric approach is considered here in opposition to an organisation-centric approach. The most common way of considering activity data in large organisations at the moment is through consolidating visits to websites in analytics, giving statistics about the number of visits on a given website or webpage, and where these visits were coming from. We qualify this as an organisation-centric view as the central point of focus is the website managed by the organisation. By taking such a restricted perspective on the interpretation of activity data, a number of potentially interesting questions, that take the users concerned with the activity data as the focus point, cannot be answered.

The meeting went well, and it was good to meet up face to face before we really get started on gathering the data, we started under a pile of biscuits and ended with a civilised drink in the Head of Steam at Huddersfield railway station before the long journey home for some.

The analysis of the activity data can also be only beneficial to the organisation, and not the user, as each user becomes aggregated in website related statistics. We therefore express our main hypothesis as

Hypothesis 1: Taking a user-centric point of view can enable different types of analysis of activity data, which are valuable to the organisation and the user. In order to test this hypothesis, one actually needs to achieve such usercentric analysis of activity data. This implies a number of technical and technological challenges, namely, the need to integrate activity data across a variety of websites managed by an organisation, to consolidate this data beyond the “number of visits”, and to interpret them in terms of user activities.

Ontologies are formal, machine processable conceptual models of a domain. Ontology technologies, especially associated with technologies from the semantic web, have proven useful in situations where a meaningful integration of large amounts of heterogeneous data need to be realised, and to a certain extent, reasoned upon in a qualitative way, for interpretation and analysis. Our goal here is to investigate how ontologies and semantic technologies can support the user-centric analysis of activity data. In other words, our second hypothesis is

Hypothesis 2: Ontologies and ontology-based reasoning can support the integration, consolidation and interpretation of activity data from multiple sources. As described in our work plan (see previous blog post), our first task is therefore to build an ontology able to flexibly describe the traces of activities across multiple websites, the users of these websites and the connections between them. The idea is to use this ontology (or rather, this set of ontologies) as a basis for a pluggable software framework, capable of integrating data from heterogeneous logs, and to interpret such data as traces of high-level activities.

The ongoing definition of these ontologies can be followed on our code repository, and a presentation of UCIAD’s basic hypothesis at the JISC Activity Data Programme event is available on slideshare.