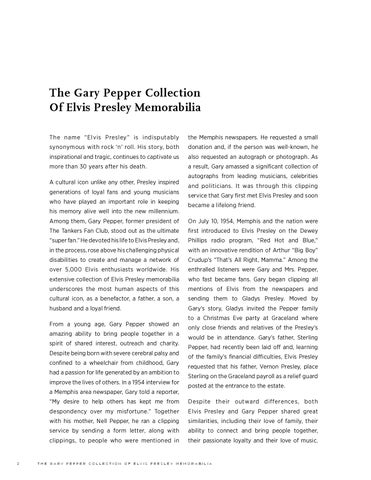 the Memphis newspapers. He requested a small

synonymous with rock ‘n’ roll. His story, both

donation and, if the person was well-known, he

inspirational and tragic, continues to captivate us

also requested an autograph or photograph. As

more than 30 years after his death.

a result, Gary amassed a significant collection of

A cultural icon unlike any other, Presley inspired generations of loyal fans and young musicians who have played an important role in keeping his memory alive well into the new millennium.

and politicians. It was through this clipping service that Gary first met Elvis Presley and soon became a lifelong friend.

Among them, Gary Pepper, former president of

The Tankers Fan Club, stood out as the ultimate

first introduced to Elvis Presley on the Dewey

“super fan.” He devoted his life to Elvis Presley and,

in the process, rose above his challenging physical

with an innovative rendition of Arthur “Big Boy”

disabilities to create and manage a network of

Crudup’s “That’s All Right, Mamma.” Among the

over 5,000 Elvis enthusiasts worldwide. His

underscores the most human aspects of this

mentions of Elvis from the newspapers and

cultural icon, as a benefactor, a father, a son, a

sending them to Gladys Presley. Moved by

husband and a loyal friend.

From a young age, Gary Pepper showed an amazing ability to bring people together in a spirit of shared interest, outreach and charity. Despite being born with severe cerebral palsy and confined to a wheelchair from childhood, Gary had a passion for life generated by an ambition to improve the lives of others. In a 1954 interview for a Memphis area newspaper, Gary told a reporter,

to a Christmas Eve party at Graceland where only close friends and relatives of the Presley’s would be in attendance. Gary’s father, Sterling Pepper, had recently been laid off and, learning of the family’s financial difficulties, Elvis Presley requested that his father, Vernon Presley, place Sterling on the Graceland payroll as a relief guard posted at the entrance to the estate.

“My desire to help others has kept me from

Despite their outward differences, both

despondency over my misfortune.” Together

with his mother, Nell Pepper, he ran a clipping

similarities, including their love of family, their

service by sending a form letter, along with

ability to connect and bring  people together,

clippings, to people who were mentioned in

their passionate loyalty and their love of music. 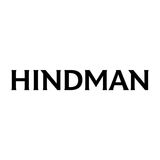 Leslie Hindman Auctioneers is proud to present over 200 lots from the legendary performer comprising the collection of Gary Pepper, former p...

Leslie Hindman Auctioneers is proud to present over 200 lots from the legendary performer comprising the collection of Gary Pepper, former p...