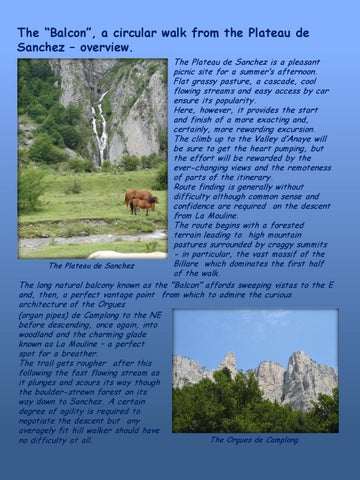 The “Balcon”, a circular walk from the Plateau de Sanchez – overview. The Plateau de Sanchez is a pleasant picnic site for a summer’s afternoon. Flat grassy pasture, a cascade, cool flowing streams and easy access by car ensure its popularity. Here, however, it provides the start and finish of a more exacting and, certainly, more rewarding excursion. The climb up to the Valley d’Anaye will be sure to get the heart pumping, but the effort will be rewarded by the ever-changing views and the remoteness of parts of the itinerary. Route finding is generally without difficulty although common sense and confidence are required on the descent from La Mouline. The route begins with a forested terrain leading to high mountain pastures surrounded by craggy summits - in particular, the vast massif of the Billare which dominates the first half The Plateau de Sanchez of the walk. The long natural balcony known as the “Balcon” affords sweeping vistas to the E and, then, a perfect vantage point from which to admire the curious architecture of the Orgues (organ pipes) de Camplong to the NE before descending, once again, into woodland and the charming glade known as La Mouline – a perfect spot for a breather. The trail gets rougher after this following the fast flowing stream as it plunges and scours its way though the boulder-strewn forest on its way down to Sanchez. A certain degree of agility is required to negotiate the descent but any averagely fit hill walker should have The Orgues de Camplong. no difficulty at all.

The “Balcon”, a circular walk from the Plateau de Sanchez - the route. Start

May – October (Often a longer season in years when snowfall is limited.)

Waypoint 1: (N42°56'27.49 W0°40'37.3; alt.1081m) – The Plateau de Sanchez. Go to the waterfall and then continue N for about 200m looking for a path on the left, winding its way up a stony slope and into the forest. The ascent is steep but the path is good and a slow but steady approach ensures that altitude is efficiently gained. There are no side turnings and, consequently, no danger of getting lost. About thirty minutes after leaving the plateau the path crosses the second of

two small clearings where water can be collected from a pipe that feeds a cattle trough. The trail stays close to a dry stream bed where the water source for the waterfall now runs underground. Continue on the well-travelled path through more trees until they suddenly give way to high pasture and, shortly afterwards, the view up the hanging valley of Anaye presents itself.

At this point, on the left, the complicated NW face of the Petit Billare towers above the valley while its opposite side is bounded by a craggy ridge that terminates with the Pic de Countende. Continue on the path that follows the stream until, close to the cabanes, a small bridge provides a useful landmark from which to locate the next part of the route. Waypoint 2: (N42 56.459 W0 41.892; alt. 1513m) â&#x20AC;&#x201C; The bridge. The route now turns back on itself heading NW and contouring the slope above a rocky outcrop. From the bridge, however, it is first necessary to go steeply N up the hillside until, after approximately 100m, a narrow path is discovered. On finding it, turn right and stick with it as it goes round the hill, rising steadily as it does so. When it begins to curl round into a more Northerly direction the landscape to the E comes into view and the section known is the Balcon begins. At times the path disappears or, indeed, becomes several paths, but keep going in the same general direction tracking back from the cliff edge when it is necessary

in order to avoid ravines and gullies. There is little danger of losing the route here but it is a good idea to watch out for the best of several paths running in the same direction. A small stream is crossed without difficulty, and beyond, the path undulates as it finds its way around the hillside. The Orgues de Camplong come into view and all too quickly the Cabane de Lacure is encountered, signalling the departure from the sensational natural balcony.

The start of the Balcon with long views to the East, the Billare to the right and the Pic du Midi d’Ossau in the distance.

Waypoint3: (N42 57.145 W0 41.455; alt. 1653m) – Cabane de Lacure. In 2011 the cabane was refurbished after years of neglect. It is now the responsibility of the Commune de Lées-Athas and is used to accommodate organised groups. Before arriving at the cabane it will have been necessary to cross a small stream. Walk back 10m to the stream and go back over it looking for the path descending NNE into the forest named “Bois de Lagrave” on the IGN map. The path zigzags down the grassy slope and in less than five minutes enters the woods on a clear path. Soon, the trail passes by a meadow on the left which, in the summer, is covered in cotton grass. At this point, cross over a stream and continue on the obvious path and, should reassurance be necessary, red marks can be seen on occasional trees.

The sound of a river in the distance gives further confirmation that one is on the correct route and this turns out to be the stream which runs through the pretty clearing known as La Mouline.

Waypoint 4: (N42 57.414 W0 41.153; alt. 1426m) – La Mouline. Although the clearing is an ideal spot for lunch and, perhaps, a siesta, it remains largely ignored and, therefore, peaceful. Cross over the bridge and walk downstream for 20m. On the left you will see a path climbing uphill which leads to the popular main path from the Refuge de L’Abérouat to the Pic d’Anie. For this route, however, it is necessary to return to the Plateau de Sanchez and this is achieved by a descent through wild forest. Continue downstream to the end of the clearing and follow the trail leading into the trees. Occasional cairns mark the way down which, generally, stays close to the river, only moving away as the terrain dictates. It is a poor path, and care is needed in places, but the descent with its deep pools, its rapids, its numerous waterfalls and its ever-present noise is highly atmospheric. Near the end of this final part of the walk, 30-40 minutes after leaving La Mouline, the forest gives way to a more open area of bracken and trees. The way veers away from the river here but carry on, as far as possible in the same line keeping it within earshot. Look out for an indistinct path turning

Waterfall on the wild descent from La Mouline sharply right leading down back to the river. Once located, it will enable the stream to be followed to the point where it flows into the Plateau de Sanchez at its northern end. Should the turning be missed, however, simply continue walking SE on the largest path which then becomes a track. Within about 20 minutes it joins the road leading down to the Plateau at its southern end from where you can walk back to the car.