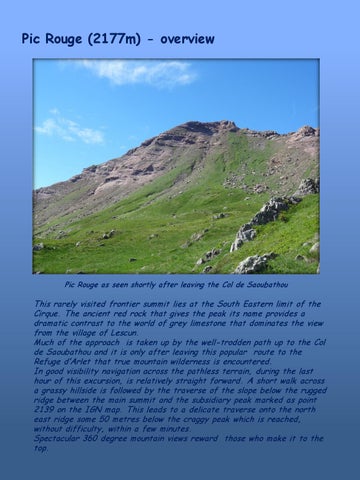 This rarely visited frontier summit lies at the South Eastern limit of the Cirque. The ancient red rock that gives the peak its name provides a dramatic contrast to the world of grey limestone that dominates the view from the village of Lescun. Much of the approach is taken up by the well-trodden path up to the Col de Saoubathou and it is only after leaving this popular route to the Refuge dâ&#x20AC;&#x2122;Arlet that true mountain wilderness is encountered. In good visibility navigation across the pathless terrain, during the last hour of this excursion, is relatively straight forward. A short walk across a grassy hillside is followed by the traverse of the slope below the rugged ridge between the main summit and the subsidiary peak marked as point 2139 on the IGN map. This leads to a delicate traverse onto the north east ridge some 50 metres below the craggy peak which is reached, without difficulty, within a few minutes. Spectacular 360 degree mountain views reward those who make it to the top.

Well-worn tracks and mountain paths with offpath route-finding in the final section. 2m of delicate, but easy, traverse on good rock.

The path from the car park at Aumet up to the Col de Saoubathou is highly frequented and well-signposted. The path rises relentlessly passing some interesting rock formations know as “roches moutonnés” (sheep-like rocks) and, after about two hours meets the path running between the Col de la Cuarde and the Refuge d’Arlet. This is... Waypoint 1 (N42 51.512 W0 38.126; alt. 1934m)

The buttress running north from point 2139 on the right with a distant view of Pic Rouge on the left.

Large rocks at the side of the buttress

After reaching an obvious grassy col continue towards the end of the buttress veering left as the ground steepens to enter the northern combe formed by the slopes below the ridge between Pic Rouge and point 2139. Continue south up the combe moving close to the large rocks at the side of the buttress (see photograph).. From here the route takes a direct line towards the summit (SSE) and numerous small cairns confirm the correct way forward. The slope, which is characterised by a mixture of rocky and vegetated terrain, is steep in places but never too strenuous. It provides the habitat for a surprising range of wild flowers, and vultures, including gypaete barbu (bearded vultures) are frequently seen soaring over the ridge above. The aim of the rising traverse across the combe is to reach a ledge some 50m below the summit which becomes clearer as one approaches.

Once reached, it is only a short but delicate traverse which bars the way to the final ridge leading to the summit. The final metres along the red rock of the ridge provide an exciting mountain experience and the views from the cramped summit are outstanding. Waypoint 3: (N42 51.089 W0 37.959; alt. 2177m) From here, the peak, the arid mountains of Spain reveal themselves to the south while,

Above :The delicate traverse to the ridge Right: Approaching the summit

to the north west, many of the mountains of the cirque are similarly exposed. To the north east, the ubiquitous Pic du Midi d’Ossau and the Pic des Sesques provide excellent photo opportunities. Watch out, too, for the strange Caperon des Sesques which, in the early days of exploration provided an important theatre for the exploits of early “Pyreneanists”. When everything has been absorbed, descend by the same route.

A walk in the Cirque de Lescun.

A walk in the Cirque de Lescun.