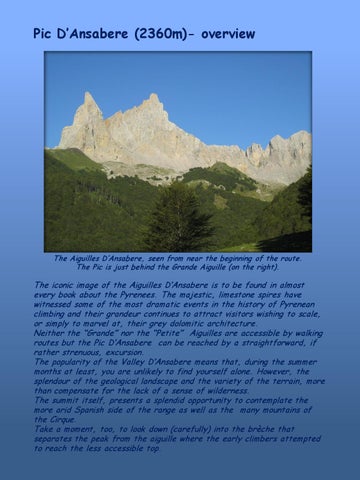 The Aiguilles D’Ansabere, seen from near the beginning of the route. The Pic is just behind the Grande Aiguille (on the right).

The iconic image of the Aiguilles D’Ansabere is to be found in almost every book about the Pyrenees. The majestic, limestone spires have witnessed some of the most dramatic events in the history of Pyrenean climbing and their grandeur continues to attract visitors wishing to scale, or simply to marvel at, their grey dolomitic architecture. Neither the “Grande” nor the “Petite” Aiguilles are accessible by walking routes but the Pic D’Ansabere can be reached by a straightforward, if rather strenuous, excursion. The popularity of the Valley D’Ansabere means that, during the summer months at least, you are unlikely to find yourself alone. However, the splendour of the geological landscape and the variety of the terrain, more than compensate for the lack of a sense of wilderness. The summit itself, presents a splendid opportunity to contemplate the more arid Spanish side of the range as well as the many mountains of the Cirque. Take a moment, too, to look down (carefully) into the brèche that separates the peak from the aiguille where the early climbers attempted to reach the less accessible top.

Mountain path to the Col de Petragem, then a poor path on the summit slope.

Waypoint 1 – Pont Lamary (alt.1209m) The track, heading initially SW, would be hard to miss even without the signpost indicating the way to the Cabanes d’ Ansabere. Within 5 minutes of setting off the Aiguilles come into view and in a further 20 minutes or so the track reaches an open grassy area known as the first, or lower, plateau. Continue, crossing three small streams, to a rock bearing a yellow way mark… Waypoint 2 – (N42 54.261 W0 42.476 ; alt.1362m) To the right of the path take note of a ruined cabane which marks the beginning of the route to the Montagne d’Escoueste and the Table des Trois Rois. For the Pic D’Ansabere, however, carry on along the main path which crosses a fourth stream before narrowing and winding up into the forest, passing another signpost. Follow the track until it leaves the trees and arrives at a second grassy area, Ansabere, and within a few minutes the first of several shepherds'’ cabanes is reached.

Waypoint 3 (N42 53.893 W0 42.977; alt. 1560) – The Cabanes d’Ansabere. Collect fresh water here if necessary. Follow the trail in a generally westerly direction avoiding any fenced-off areas, keeping to the lower part of the valley with the chaos of rocks and boulders to the left. As the path climbs steeply to the Col de Petragem, and ever closer to the Petite Aiguille, the Peak and Table des Trois Rois reveal themselves to the N. To the SE it is possible to discern a stream descending from what appears to be a grassy basin. This, like a cupped hand, holds the Lac d’Ansabere. Continue strenuously to the Col.

The Pic and Col de Petrageme with the Petite Aiguille on the right, as seen from near the cabanes.

About half way up, the path comes close to edge of the precipice providing a moment to view a cliff of rotten orange limestone. Climbing higher the cairns become less frequent. Nevertheless, signs of erosion make the route easy to follow and the summit is reached without difficulty. Descend by the same route.

(On 24th June 1923 Lucien Carrive and Armand Calame abseiled from the peak into the breche. Their goal was to become the first to scale the summit of the Grande Aiguille. Carrive fell to his death when their primitive climbing rope failed to take his weight and Calame, having reached the summit, was unable to descend, he too plunging, fatally to the bottom of the cliff. )