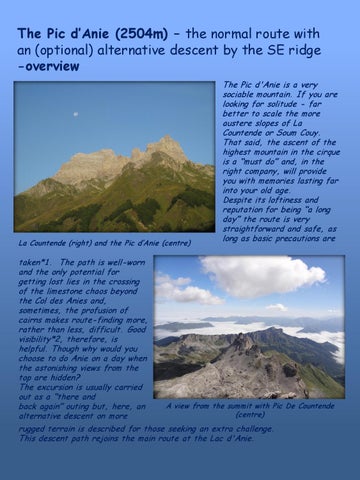 taken*1. The path is well-worn and the only potential for getting lost lies in the crossing of the limestone chaos beyond the Col des Anies and, sometimes, the profusion of cairns makes route-finding more, rather than less, difficult. Good visibility*2, therefore, is helpful. Though why would you choose to do Anie on a day when the astonishing views from the top are hidden? The excursion is usually carried out as a “there and back again” outing but, here, an alternative descent on more

The Pic d'Anie is a very sociable mountain. If you are looking for solitude - far better to scale the more austere slopes of La Countende or Soum Couy. That said, the ascent of the highest mountain in the cirque is a “must do” and, in the right company, will provide you with memories lasting far into your old age. Despite its loftiness and reputation for being “a long day” the route is very straightforward and safe, as long as basic precautions are

A view from the summit with Pic De Countende (centre)

rugged terrain is described for those seeking an extra challenge. This descent path rejoins the main route at the Lac d'Anie.

• Waypoint 1 (N42 56.998 W0 39.847 alt. 1422m) – Car park for the Refuge De L’Abérouat (Béarnaise for a stand of hazel trees) From the car park walk up the road to the refuge. Continue past the large building following the main path into the Bois du Braca Azuna. From here the route through the forest is impossible to miss and there are no side turnings except for less obvious bifurcation down to the pretty clearing of La Mouline. 3km of fairly level walking lead to the abruptly marked tree line and the start of the high pastures just below the Cabane D’Ardinet, with views, straight ahead, of the Pic De Soum Couy. To the left, SW, the Pic de Countende also appears. From here continue generally West to the Cabane du Cap de La Baitch. • Waypoint2 (N42 57.526 W0 42.313 alt. 1689m) – Cabane du Cap de la Baitch. One path leads North from here snaking up towards the Pas D’Azun, but the way to the Pic d'Anie heads across the sheep folds, before turning SW towards a boulder-filled stream bed which is crossed in order to continue the ascent on the far side. The path is well-worn and, therefore, easy to follow. It leads, approximately 35 minutes after leaving the cabane, to a small, flat grassy area known as the Lac d'Anie. In fact, there is no lake here. It is at best a small boggy area but significant, nonetheless, as this is where the alternative descent rejoins the normal route.

• Waypoint3 (N42 57.224 W0 42.735 alt. 2042m) – The Lac d'Anie. Continue W ignoring the less obvious minor path leading off to the left (descent path). Grass is soon left behind as the way forward enters a jumble of rocks and boulders and the Pic d'Anie comes into to view to the SSW. Numerous cairns and painted flashes mark the way

until an obvious shoulder overlooking a chaotic, limestone landscape is reached. A large rock with a red Y painted on it confirms the spot as the Col d'Anies. • Waypoint4 (N42 57.243 W0 43.211 alt.2084m) – The Col d'Anies. In good visibility the way across this lunar landscape, with its multitude of cairns and red and yellow waymarks, will be easy to find. Descend at first from the Col d'Anies, avoiding the higher path that continues to Arrete. The general direction from the shoulder is S, but the route twists and turns as it weaves through a basin of crevasses and craters before rising up to meet a good path in the scree. •Waypoint 5 (N42 56.992 W0 43.143; alt. 2157m) – The good path in the scree. Follow the path SW which moves closer to the mountain, eventually contouring the base of the NW face. Two small rocky steps are easily passed before encountering a longer rocky bar. This too is surmounted with little difficulty by engaging in a very low-angled chimney. • Waypoint 6 (N42 56.628 W0 43.439; alt. 2309m) – The top of the shallowangled chimney. Shortly after this the way turns E on the final summit slopes. Continue on the obvious, highly-frequented line over some minor obstacles before turning back NW to arrive at the summit. Waypoint 7 (N42 56.657 W0 43.241; alt. 2504m) – The summit of Pic d'Anie. Time for back slapping; congratulations all round, a wellearned rest some food and (as is often seen here) a little something to celebrate while enjoying one of the best views in the cirque.

Alternative descent by the SE ridge Most summiteers will descend by the same route but the SE ridge provides views of different aspects of the mountain including a close-up of ridge that culminates with the Pic de Countende. Soon after leaving the top the chatter and photosnapping of the summer crowds are forgotten as a more rugged terrain is entered. From the summit go SE, carefully moving over jagged rocks before reaching a poor path that continues in the line of the ridge. At the lowest point of the ridge a small grassy area is encountered and here cairns mark the top of a rocky gully.

Coming down the jagged rocks of the SE ridge.

is abandoned for the rocky gully which descends in a generally ESE direction. Numerous cairns mark the way down but, frankly, there is very little choice about where to go on this stretch. Near the bottom of the ravine, however, a profusion of cairns leading in a more northerly direction signal alternative routes to the easier path which passes just above the Col de Countende. Waypoint 9 (N42 56.695 W0 42.973; alt.2234m) – (At this point,, it is worth noting that it is possible to pass over the Col down into the valley of Anaye.) The route back to the Lac d'Anie, however, leaves the Col de Countende on the right and takes the main path leading NNE along the side of Countende’s ridge.

Looking down the rocky gully to the Col de Countende and the beginning of its rotten ridge. Below is the valley of Anaye.

Numerous cairns leading off to the left should be ignored until a large cairn marking the start of the path across the scree to the base of Countende is reached. From this point it is possible to follow cairns taking the easiest line trending NNW, then N until arriving to a grassy zone and a good path coming down form the direction of the Pic d'Anie. Use this path, following it down in a NE direction in order rejoin the main route at the Lac d'Anie

*1 In 2011 two walkers lost their lives for lack of spare clothing. and a mobile phone. *2 If mists are low over Lescun there is an exceedingly good chance that Anie will be clear with gasp-provoking opportunities to observe clouds from both sides â&#x20AC;&#x201C; above and below..