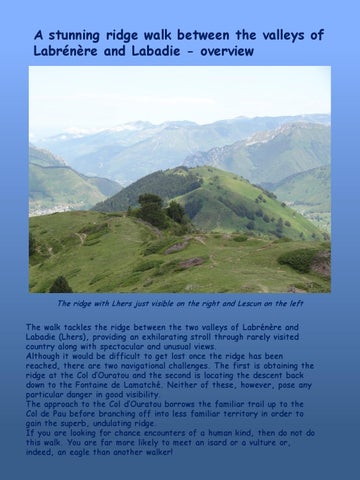 The walk tackles the ridge between the two valleys of Labrénère and Labadie (Lhers), providing an exhilarating stroll through rarely visited country along with spectacular and unusual views. Although it would be difficult to get lost once the ridge has been reached, there are two navigational challenges. The first is obtaining the ridge at the Col d’Ouratou and the second is locating the descent back down to the Fontaine de Lamatché. Neither of these, however, pose any particular danger in good visibility. The approach to the Col d’Ouratou borrows the familiar trail up to the Col de Pau before branching off into less familiar territory in order to gain the superb, undulating ridge. If you are looking for chance encounters of a human kind, then do not do this walk. You are far more likely to meet an isard or a vulture or, indeed, an eagle than another walker!

4.5 -5hrs for the complete circuit

Route on the French IGN map

From the car park at Labrénère follow the obvious track running South. Cross the new Pont d’Itchaxe and then pass below the Cabanes d’Itchaxe. Continue on the well-worn path to the Col de Pau passing the Cabanes du Penot before continuing steeply to the Cabanes de Bonaris.

(This part of the route is described in greater detail in the walk called “Lariste (2168m) - 3 peaks, a frontier walk with a descent via a forgotten valley”.) Waypoint 1: (N42 52.957 W0 39.989; alt. 1713m) The Cabanes de Bonaris. Collect water from the main cabane, if necessary, and continue on the path to the Col de Pau. About 20 minutes after leaving the cabanes the path reaches a shoulder just before the chaos of boulders below the frontier. To the ESE notice an obvious dip in the ridge which forms the next objective.

(See photograph on the next page)

Above: The boulder chaos, the shoulder and the dip in the ridge as seen from the path to the Col de Pau. Straight ahead is Pic de Burcq. Right: Taking a break in the dip (looking East).

Waypoint 2: (N42 52.663 W0 39.804; alt.1807 m) Leaving the path to the Col de Pau. Take the easiest line towards the dip avoiding, where possible, loss of height. Within 10 minutes or so a sort of ramp is reached which zigzags up to what turns out to be a false col. Pass over this and descend on grass to pick up a faint path and occasional cairns heading straight on (E). The trail contours a small hill on its left side with the Col dâ&#x20AC;&#x2122;Ouratou coming into view on the ridge. Keep going towards the ridge always taking the cairned line.

(See photograph on the next page)

Descending from the dip, cairned paths lead to the Col d’Ouratou , seen here, in the centre of the photograph.

This descent is described in the route entitled Alternative descent from “Le Chemin de la Liberté” . However, for this route it is necessary to

tackle to ridge running generally NE. Begin by going over the Pic Ouratou and descend the steep grassy slope on the other side. Beyond, the path becomes better defined and there is a clear view across the next col to the second peak on the ridge. On reaching this minor summit go round it on the left hand side at mid height avoiding the seduction of lower trails that lead away from the ridge. At the far side of the second peak a sharp rocky arête is gained, with two prominent cairns marking the point where it is crossed in order to continue on the main ridge. The descent is steep at first but quickly becomes more amenable.

The third summit on the ridge is reached without difficulty and can be tackled head on, passing directly over the top and descending gently down the other side. Just a few minutes later the next obstacle, the fourth minor summit of the route, is overcome with similar ease by using the rising cattle track on the right hand side of the hill. Beyond, the ridge flattens out and provides a good opportunity to relax and enjoy the magnificent views ahead and to each side. Concentration will be required again, however, when the way forward is barred an impassable rocky step. Above: descending from the knifeedged ridge with the third and fourth peaks on the route clearly visible ahead. Right: the muddy pond just before the Soum de LamatchĂŠ

At this point look for a small but obvious path on the right which passes through some trees before zigzagging steeply down, on the Labadie side of the crète. The a metal cattle fold below provides a useful landmark here. The path then trends N past a small muddy pond and on along the broad, grassy ridge to reach the Soum de Lamatché (1608m) where the ground ahead drops resolutely away, though not too steeply Time for a pause, to sit down, to take in the magnificent surroundings, and plot the way off the ridge.

Descending from Soum de Lamatché. The way off the ridge begins just after the little, rounded hill in sunlight.

Continue down on the obvious line to… Waypoint 5: (N42 88. 988 W0 64 28.931; alt. 1498m) From here the long, diagonal descent from the ridge commences in a NNW direction with the ultimate objective: the valley of Labrénère, clearly visible below. Take the easiest line and go down the grassy slopes to reach a prominent cairn and, a little further on, a water trough. The way forward is now even clearer and, within 10 – 15 minutes, the Fontaine de Lamatché is reached on the path back to the car park.

Ridge between Labrénère and Labadie

A stunning ridge walk between the valleys of Labrénère and Labadie

Ridge between Labrénère and Labadie

A stunning ridge walk between the valleys of Labrénère and Labadie