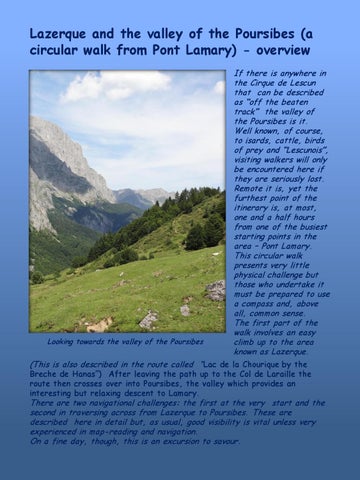 Looking towards the valley of the Poursibes

If there is anywhere in the Cirque de Lescun that can be described as “off the beaten track” the valley of the Poursibes is it. Well known, of course, to isards, cattle, birds of prey and “Lescunois”, visiting walkers will only be encountered here if they are seriously lost. Remote it is, yet the furthest point of the itinerary is, at most, one and a half hours from one of the busiest starting points in the area – Pont Lamary. This circular walk presents very little physical challenge but those who undertake it must be prepared to use a compass and, above all, common sense. The first part of the walk involves an easy climb up to the area known as Lazerque.

Breche de Hanas”) After leaving the path up to the Col de Laraille the route then crosses over into Poursibes, the valley which provides an interesting but relaxing descent to Lamary.

There are two navigational challenges: the first at the very start and the second in traversing across from Lazerque to Poursibes. These are described here in detail but, as usual, good visibility is vital unless very experienced in map-reading and navigation. On a fine day, though, this is an excursion to savour.

notes in “getting to the start of the routes”.

From the bridge walk back down the track for a few minutes until a poor track, marked by red and white flashes, appears to lead off to the right. Almost immediately, the track disappears and a vague path is followed heading generally south up through the bracken where more red and white waymarks on rocks and trees provide reassurance. Keep to the broader part of the hill and avoid being led on to the steeper ground to the left until, at the top of the shoulder, a boulder strewn area is encountered with, just beyond, a short, steep slope leading into the forest. Climb the short slope at a point marked by small cairns, trending diagonally right, until the forest path is located. Once found, the route is well defined, so do not follow anything that that is not an obvious path. Red and white flashes mark the way up through the forest. At times the path becomes less distinct. In these places look out for signs of passage, cairns and/or more painted waymarks. After about 30 minutes a large, grassy clearing, scattered with large limestone blocks, is reached. This is … Waypoint 2 (N42 53.648 W0 41.276; alt.1424) On entering the clearing a dry stream bed becomes obvious on the right. This is followed to the top of the open grassy area where small invasive trees become prevalent. Further cairns and painted flashes mark the point where the stream bed is crossed and, quickly another open area is reached. The clearing with scattered limestone blocks As height is gained, always following cairns and red and whites flashes, two ruined shepherds’ cabins are passed.

• Waypoint 3 (N42 53.443 W0 41.324; alt. 1527m) The remains constitute little more than a pile of rocks – a sad testimony to the changing way of life in the mountains. From the cabanes continue to follow the main path, generally SW. The route will, eventually, lead to the Col de Laraille but it must be abandoned at the point where the valley narrows.

Waypoint 4: (N42 53.358 W0 41.456; alt. 1588) This is where the main path is abandoned in order to begin the traverse into Poursibes. Turn right (W) and, on a poor path, climb what appears to be a grassy hill. On the opposite side of the valley some impressive cliffs come into view. Using them as a landmark continue towards them, gaining height, until the top of a hill is reached.

Waypoint 5: (N42 53.347 W0 41.639; alt. 1635m) The hill provides an excellent vantage point from which to survey the area. To the SW is the jagged frontier ridge while, closer at hand, it is possible to look down on the head of the Poursibes valley. To the NNE, however, a conspicuous conical hill indicates the way ahead. To begin with, head off towards it but veer left on the flank of the hillside that descends into the obvious grassy valley. There is no path and no cairns, but the terrain presents no difficulty, so simply choose the easiest line. Once in the valley a relaxed stroll down provides ample opportunity to enjoy the surrounding landscape, in particular the magnificent cliffs of the Peaks of La Leurt and Poure De Lamary.

The descent into the Poursibes valley

Waypoint 6: (N42 53.945 W0 41.724; alt 1338m) Here, near the bottom of the valley, it is necessary to cross over a muddy stream bed. Contour the slope on the far side and continue down through the trees in order to arrive in the main valley of Ansabere. Trend right to join the main path leading back to the Pont Lamary which is reached in just a few minutes.

Relaxing on the way down