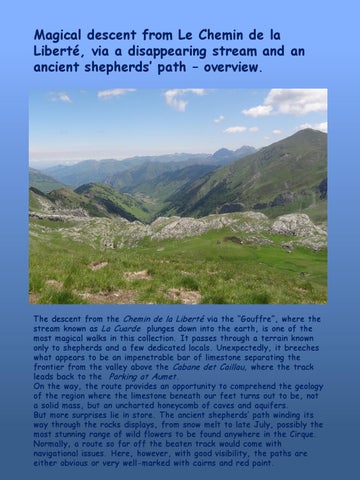 The descent from the Chemin de la Liberté via the “Gouffre”, where the stream known as La Cuarde plunges down into the earth, is one of the most magical walks in this collection. It passes through a terrain known only to shepherds and a few dedicated locals. Unexpectedly, it breeches what appears to be an impenetrable bar of limestone separating the frontier from the valley above the Cabane det Caillau, where the track leads back to the Parking at Aumet. On the way, the route provides an opportunity to comprehend the geology of the region where the limestone beneath our feet turns out to be, not a solid mass, but an uncharted honeycomb of caves and aquifers. But more surprises lie in store. The ancient shepherds’ path winding its way through the rocks displays, from snow melt to late July, possibly the most stunning range of wild flowers to be found anywhere in the Cirque. Normally, a route so far off the beaten track would come with navigational issues. Here, however, with good visibility, the paths are either obvious or very well-marked with cairns and red paint.