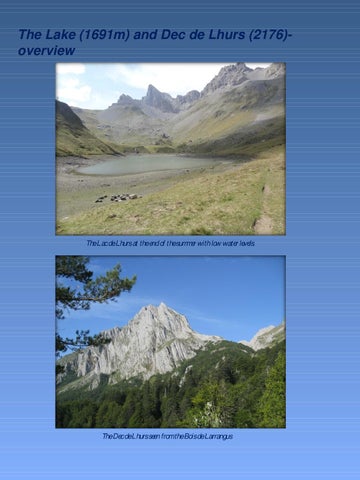 The Lac de Lhurs at the end of the summer with low water levels.

The Dec de Lhurs seen from the Bois de Larrangus

This itinerary offers two objectives, both of which provide ample rewards for those prepared to make the effort. The lake is a perfect spot for a picnic, a place to bathe and an opportunity to appreciate some high mountain scenery. The Billare, the Table des Trois Rois and Penablanque tower above the basin that holds this interesting stretch of water. Route finding presents no difficulties, as the way to the lake is well-trodden. To cap it all, if you are a keen angler, it is home to some impressive rainbow trout. (Fishing allowed at weekends only). The Dec, which is clearly visible from Lescun to the left of the Billare, presents more of a challenge and is best undertaken in clear visibility by those willing to engage in some easy scrambling on rock that is not always solid. The author and Marquise, on the summit of the Dec.

Parking near Borde Dâ&#x20AC;&#x2122;Anapia at the start of the track to Sanchez

Good mountain path to the lake. Grassy slopes to the summit ridge followed by rocky terrain and scrambling on unsure rock.

With a robust vehicle it is possible to drive further on from the parking at Anapia. To do so, continue along the track towards Sanchez and take the second turning on the left. Follow the rough road until you come to the first waypoint. If you are unsure about your car, leave it at the parking place and follow the track to Sanchez but take a short cut by using the first turning on the left. When you meet the larger track, turn left again and follow it to Waypoint One.

â&#x20AC;˘ Waypoint 1 (N42 55.455 W0 40.088 alt.1044 m) At this point the track forks and there is a signpost indicating the way to the lake. Pass a stone house in a meadow before climbing steeply up into the forest. At the end of the steep section the trail meets another forestry track. Turn left here following the yellow waymarks. Continue up through the Bois de Bresme and Larrangus until the path narrows and moves further to the edge of a step valley and, for the first time since leaving the village, the Dec de Lhurs comes into view to the South West. At a place where impressive cliffs form the opposite side of a deep ravine, the path turns up right into the forest, away from the old trail, the remains of which can still be seen. These days, forestry exploitation has provided walkers with this a and easier ascent for this section of the route. Take a moment on the ascent to register views of the incredibly complex faces of the Billare, the mountain which more than any other defines the Cirque. The deep ravine

After just a few minutes the path joins a larger forest track. Turn left, always following the yellow markers, and pass between a pair of stone pillars, placed to prevent forestry vehicles going any further. About an hour after setting off from Waypoint 1 trees give way to a more open landscape.

• Waypoint 2 (N 42°55'20.68 W 0°41'23.37 alt. 1501m) Traverse the barren slopes below the Billare’s South face on a good path well above a dried up water course. After a couple of hundred metres the path drops down into the river bed at a place where it can be crossed. • On the other side of the gully follow the obvious path through trees until it gains an exposed shoulder with excellent views of the Plateau de Lescun and the mountains to the East, including the ancient volcano of the Pic Du Midi D’Ossau. Continue through a rocky terrain on the trail with its yellow waymarks and cairns until the lake is reached approximately 2 hours from the start.

To the Dec De Lhurs • Waypoint 3 (N42 55.347 W0 42.177 alt.1691) Lac De Lhurs. Walk around the lake in either direction heading for a prominent V-shaped cleft near a large block perched at the bottom of a grassy slope. Go up the cleft to arrive at the bottom of a small valley. There is no single, correct way from this point and faint paths and sporadic cairns can be misleading. The objective is to reach the summit ridge at Waypoint 4 (alt. 1974) by finding the line of least resistance which will absolutely not be the shortest route.

So, do not be tempted to take shortcuts by tackling steeper ground. This will only end in tears! It is much better to leave the lake following the valley up SSE at first, then SW, keeping the obvious boulder field on the right. Eventually rocky bluffs will force the route to the left and before long a lone tree will become visible on the skyline. Aim for the tree, always circumventing difficult ground. Just before the arête veer left, away from the tree, guided by a better path and a few cairns, to arrive at Waypoint 4.

Looking ahead from the lake. The point where the summit ridge is joined is out of site to the left.

The lone tree on the skyline

• Waypoint 4 (N42 54.822 W0 42.493 alt. 1974m) Turn back left on the ridge and begin the climb to the summit taking a moment to look down the other side into the Valley of Ansabere. There are no route-finding difficulties on this part of the route but some sections are steep and care is required where the arête becomes “knife-edged”.

As the summit is approached, the terrain becomes more chaotic and it is necessary find the easiest way through the maze of rock some of which, as previously mentioned, should not be relied on to support the weight of a human being. In brief, if you start to feel worried, look for an easier passage.

Looking down to the plateau from the summit

•Waypoint 5 (N42 54.924 W0 42.123 alt. 2176m) The Dec De Lhurs. Although it is not particularly high for the area, the Dec occupies an exceptional position in the Cirque providing an unusual angle from which to view some of the major summits such as the Billare, the Aiguilles D’Ansabere and the Table Des Trois Rois as well as the plateau and village of Lescun. It is a hugely satisfying peak where those who reach it will want to linger and take many photographs. When it is time to depart, descend by the same route.

An unusual view of the Aiguilles D’Ansabere, taken from the Dec.

A splendid ascent of a little frequented mountain

A splendid ascent of a little frequented mountain