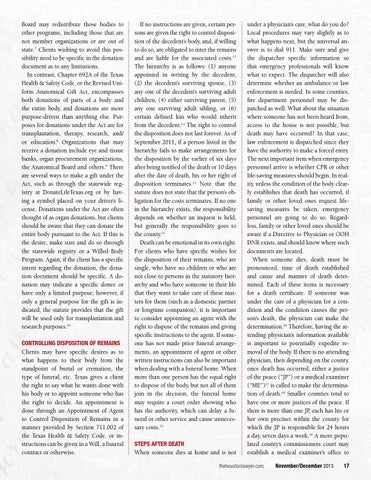 Board may redistribute those bodies to other programs, including those that are not member organizations or are out of state.7 Clients wishing to avoid this possibility need to be specific in the donation document as to any limitations. In contrast, Chapter 692A of the Texas Health &amp; Safety Code, or the Revised Uniform Anatomical Gift Act, encompasses both donations of parts of a body and the entire body, and donations are more purpose-driven than anything else. Purposes for donations under the Act are for transplantation, therapy, research, and/ or education.8 Organizations that may receive a donation include eye and tissue banks, organ procurement organizations, the Anatomical Board and others.9 There are several ways to make a gift under the Act, such as through the statewide registry at DonateLifeTexas.org or by having a symbol placed on your driver’s license. Donations under the Act are often thought of as organ donations, but clients should be aware that they can donate the entire body pursuant to the Act. If this is the desire, make sure and do so through the statewide registry or a Willed Body Program. Again, if the client has a specific intent regarding the donation, the donation document should be specific. A donation may indicate a specific donee or have only a limited purpose; however, if only a general purpose for the gift is indicated, the statute provides that the gift will be used only for transplantation and research purposes.10 CONTROLLING DISPOSITION OF REMAINS Clients may have specific desires as to what happens to their body from the standpoint of burial or cremation, the type of funeral, etc. Texas gives a client the right to say what he wants done with his body or to appoint someone who has the right to decide. An appointment is done through an Appointment of Agent to Control Disposition of Remains in a manner provided by Section 711.002 of the Texas Health &amp; Safety Code, or instructions can be given in a Will, a funeral contract or otherwise.

If no instructions are given, certain persons are given the right to control disposition of the decedent’s body, and, if willing to do so, are obligated to inter the remains and are liable for the associated costs.11 The hierarchy is as follows: (1) anyone appointed in writing by the decedent, (2) the decedent’s surviving spouse, (3) any one of the decedent’s surviving adult children, (4) either surviving parent, (5) any one surviving adult sibling, or (6) certain defined kin who would inherit from the decedent.12 The right to control the disposition does not last forever. As of September 2011, if a person listed in the hierarchy fails to make arrangements for the disposition by the earlier of six days after being notified of the death or 10 days after the date of death, his or her right of disposition terminates.13 Note that the statute does not state that the person’s obligation for the costs terminates. If no one in the hierarchy exists, the responsibility depends on whether an inquest is held, but generally the responsibility goes to the county.14 Death can be emotional in its own right. For clients who have specific wishes for the disposition of their remains, who are single, who have no children or who are not close to persons in the statutory hierarchy and who have someone in their life that they want to take care of these matters for them (such as a domestic partner or longtime companion), it is important to consider appointing an agent with the right to dispose of the remains and giving specific instructions to the agent. If someone has not made prior funeral arrangements, an appointment of agent or other written instructions can also be important when dealing with a funeral home. When more than one person has the equal right to dispose of the body, but not all of them join in the decision, the funeral home may require a court order showing who has the authority, which can delay a funeral or other service and cause unnecessary costs.15 STEPS AFTER DEATH When someone dies at home and is not

under a physician’s care, what do you do? Local procedures may vary slightly as to what happens next, but the universal answer is to dial 911. Make sure and give the dispatcher specific information so that emergency professionals will know what to expect. The dispatcher will also determine whether an ambulance or law enforcement is needed. In some counties, fire department personnel may be dispatched as well. What about the situation where someone has not been heard from, access to the house is not possible, but death may have occurred? In that case, law enforcement is dispatched since they have the authority to make a forced entry. The next important item when emergency personnel arrive is whether CPR or other life-saving measures should begin. In reality, unless the condition of the body clearly establishes that death has occurred, if family or other loved ones request lifesaving measures be taken, emergency personnel are going to do so. Regardless, family or other loved ones should be aware if a Directive to Physician or OOH DNR exists, and should know where such documents are located. When someone dies, death must be pronounced, time of death established and cause and manner of death determined. Each of these items is necessary for a death certificate. If someone was under the care of a physician for a condition and the condition causes the person’s death, the physician can make the determination.16 Therefore, having the attending physician’s information available is important to potentially expedite removal of the body. If there is no attending physician, then depending on the county, once death has occurred, either a justice of the peace (“JP”) or a medical examiner (“ME”)17 is called to make the determination of death.18 Smaller counties tend to have one or more justices of the peace. If there is more than one JP, each has his or her own precinct within the county for which the JP is responsible for 24 hours a day, seven days a week.19 A more populated county’s commissioners court may establish a medical examiner’s office to