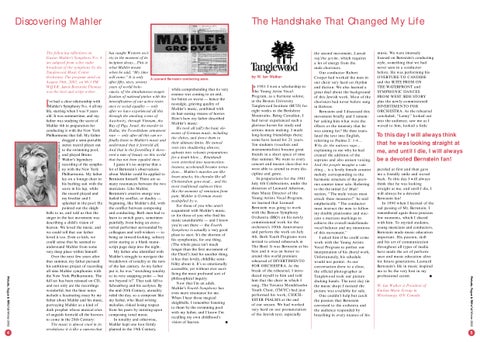 The Handshake That Changed My Life

The following reflections on Gustav Mahler’s Symphony No. 4 are adapted from a live radio broadcast of the symphony by the Tanglewood Music Center Orchestra. The program aired on August 19th, 2002, on 96.3 FM WQXR. Jamie Bernstein Thomas was the host and script writer.

n 1981 I won a scholarship to the Young Artist Vocal Program, as a baritone soloist, at the Boston University Tanglewood Institute (BUTI) for eight weeks in the Berkshire Mountains. Being Canadian, I had never experienced such a glorious haven for study and serious music making. I made long-lasting friendships there; some have lasted for 21 years. Ten students (vocalists and instrumentalists) became great friends in a short space of time that summer. We went to every concert and master class that we were able to attend in every discipline and genre. In preparations for the 1981 July 4th Celebrations, under the direction of Leonard Atherton, then Music Director of the Young Artists Vocal Program, we learned that Leonard Bernstein was going to work with the Boston Symphony Orchestra (BSO) on his newly commissioned work for the orchestra’s 100th Anniversary and perform the work on July 4th. Both Youth Programs were invited to attend rehearsals in The Shed. It was Bernstein at his best and it was an honor to attend this world premiere rehearsal of DIVERTIMENTO FOR ORCHESTRA. At the break of the rehearsal, I introduced myself to him and told him that the choir in which I sang, The Toronto Mendelssohn Youth Choir, (TMYC) had just performed his work, CHICHESTER PSALMS at the end of our season. We had worked very hard on our pronunciation of the Jewish text, especially

the second movement, Lamah rag’shu goyim, which requires a lot of energy from the male choristers. Our conductor Robert Cooper had worked the men in our choir very hard on rhythm and diction. We also learned a great deal about the background of this Jewish work. Most of the choristers had never before sung in Hebrew. Bernstein and I discussed this movement briefly and I remember asking him what were the effects or the intensity that he was aiming for? He then translated the text into English, referring to Psalms 2: 1-4… Why do the nations rage… explaining to me why he had created the addition of the soprano and alto unison voicing. And the people imagine a vain thing… is a lovely female counter melody corresponding to the harmonic structure of the previous counter tenor solo. Referring to the the initial La! Mah! section, “The male voices must attack these measures!” he said emphatically. “The conductor must instruct the men to follow my double pianissimo and staccato e marcato markings to achieve the overall male/female vocal balance and my intentions of this movement.” I asked him if he could come work with the Young Artists Vocal Program to perfect our interpretation of his choral work. Unfortunately, his schedule would not permit. As our conversation drew to a close, the official photographer at Tanglewood took our picture shaking hands. The next day (in the music shop) I noticed the picture was available for sale. One couldn’t help but catch the passion that Bernstein conveyed to the orchestra and the audience responded by breathing in every nuance of his

music. We were intensely focused on Bernstein’s conducting style, something that we had never seen in a conductor before. He was performing his OVERTURE TO CANDIDE and the SUITE FROM ON THE WATERFRONT and SYMPHONIC DANCES FROM WEST SIDE STORY plus the newly commissioned DIVERTIMENTO FOR ORCHESTRA. As the rehearsal concluded, “Lenny” looked out into the audience, saw me as I waved to him, looked a little

’ve had a close relationship with Mahler’s Symphony No. 4 all my life, starting when I was 9 years old. It was summertime, and my father was studying the score of Mahler 4th in preparation for conducting it with the New York Philharmonic that fall. My father dragged a semi-portable stereo record player out to the swimming pool, and played Bruno Walter’s legendary recording of the symphony with the New York Philharmonic. My father lay on a lounge chair in his bathing suit with the score in his lap, while the record played and my brother and I splashed in the pool. He pointed out the sleighbells to us, and told us that the singer in the last movement was describing a child’s vision of heaven. We loved the music, and we could tell that our father loved it too. Even as kids, we could sense that he seemed to understand Mahler from some very deep place within himself. Over the next few years after that summer, my father pursued his ambitious project of recording all nine Mahler symphonies with the New York Philharmonic. The full set has been reissued on CD, and not only are the recordings wonderful, but the liner notes include a fascinating essay by my father about Mahler and his music, portraying Mahler as a kind of dark prophet whose musical cries of anguish foretold all the horrors to come in the 20th Century: The music is almost cruel in its revelations: it is like a camera that

has caught Western society in the moment of its incipient decay…This is what Mahler meant when he said, “My time will come.” It is only A Leonard Bernstein conducting score. after fifty, sixty, seventy years of world holowhile comprehending that its very causts, of the simultaneous magniessence was coming to an end, fication of national pieties with the for better or worse — hence the intensification of our active resistnostalgic, grieving quality of ance to social equality — only Mahler’s music, combined with after we have experienced all this its hair-raising visions of horror. through the smoking ovens of Here’s how my father described Auschwitz, through Vietnam, the Mahler’s music: Bay of Pigs, Israel, the murder in He took all (all!) the basic eleDallas, the Tweedledum armament ments of German music, including race — only after all this can we the cliches, and drove them to finally listen to Mahler’s music and their ultimate limits. He turned understand that it foretold all. rests into shuddering silences; And that in the foretelling it showupbeats into volcanic preparations ered a rain of beauty on this world for a death blow… Ritardandi that has not been equaled since. were stretched into near-motionI guess it’s no surprise that a lessness; accelerandi became tornalot of Bernstein’s observations does… Mahler’s marches are like about Mahler could be applied to heart attacks, his chorales like all Bernstein himself. There are so Christendom gone mad… and his many resonances between the two most traditional cadences bless musicians. Like Mahler, like the moment of remission from Bernstein’s creative energy was pain. Mahler is German music fueled by conflict, or duality — multiplied by n. beginning, like Mahler’s did, with For those of you who aren’t the conflict between composing acquainted with Mahler’s music, and conducting. Both men had to or for those of you who find his learn to switch gears, sometimes music unendurable — and I know painfully, from being an extroyou’re out there — the Fourth verted performer surrounded by Symphony is actually a very good colleagues and well-wishers — to place to start. It’s the shortest of being an inward-looking, solitary his symphonies, for one thing. artist staring at a blank manu(The whole piece isn’t much script page deep into the night. longer than the first movement of My father also identified with the Third!) And for another thing, Mahler’s struggle to navigate the it has that lovely, childlike sensibreakdown of tonality at the turn bility about it. It’s so emotionally of the last century. As my father accessible, yet without ever sacriput it, he was “stretching tonality ficing the most profound sort of to its very snapping point — but philosophical inquiry. not beyond it!” That task fell to Now that I’m an adult, Schoenberg and his acolytes. By Mahler’s Fourth Symphony has the mid-20th Century, atonality even more resonance for me. ruled the day, so a composer like When I hear those magical my father, who liked writing sleighbells, I remember listening melodies, risked losing respect to them by the swimming pool from his peers by insisting upon with my father, and I know I’m composing tonal music. recalling my own childhood’s In tonality and otherwise, ■ vision of heaven. Mahler kept one foot firmly planted in the 19th Century, 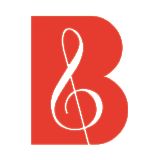