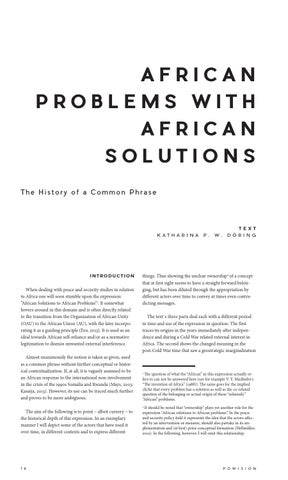 When dealing with peace and security studies in relation to Africa one will soon stumble upon the expression: “African Solutions to African Problems”1. It somewhat hovers around in this domain and is often directly related to the transition from the Organization of African Unity (OAU) to the African Union (AU), with the later incorporating it as a guiding principle (Ero, 2013). It is used as an ideal towards African self-reliance and/or as a normative legitimation to dismiss unwanted external interference. Almost unanimously the notion is taken as given, used as a common phrase without further conceptual or histor­ ical contextualization. If, at all, it is vaguely assumed to be an African response to the international non-involvement in the crisis of the 1990s Somalia and Rwanda (Mays, 2003; Kasaija, 2013). However, its use can be traced much further and proves to be more ambiguous. The aim of the following is to point – albeit cursory – to the historical depth of this expression. In an exemplary manner I will depict some of the actors that have used it over time, in different contexts and to express different

things. Thus showing the unclear ownership2 of a concept that at first sight seems to have a straight forward belonging, but has been diluted through the appropriation by different actors over time to convey at times even contradicting messages. The text᾽s three parts deal each with a different period in time and use of the expression in question. The first traces its origins in the years immediately after independence and during a Cold War related external interest in Africa. The second shows the changed meaning in the post-Cold War time that saw a geostrategic marginalization

The question of what the “African” in this expression actually refers to can not be answered here (see for example V. Y. Mudimbe&#39;s “The invention of Africa” (1988)). The same goes for the implied cliché that every problem has a solution as well as the co-related question of the belonging or actual origin of these “solemnly” “African” problems.

It should be noted that “ownership” plays yet another role for the expression “African solutions to African problems”. In the peace and security policy field it represents the idea that the actors affected by an intervention or measure, should also partake in its implementation and (at best) prior conceptual formation (Hellmüller, 2012). In the following, however, I will omit this relationship.