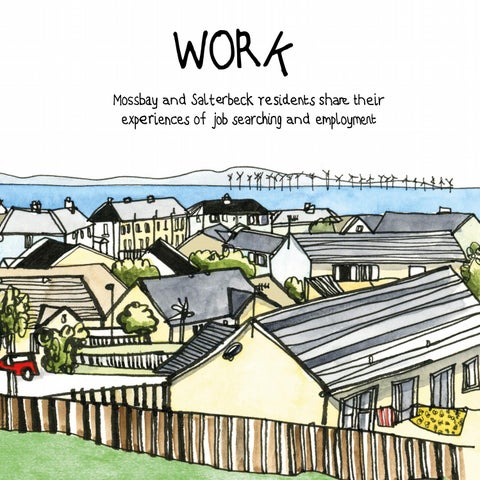 Improving Employment Opportunities We are a group of local residents from Mossbay and Salterbeck working on a project with Lancaster University, Cumbria County Council and Allerdale Borough Council. We’ve been talking to local people of all ages to find out what it’s like to be looking for work and we’ve also been talking to people who already have a job. We want to improve employment opportunities for people round here. The stories you’ll read in this booklet are real stories from real people living and working in this area. We’re sharing our findings with the local authority, local employers and the NHS to help them better understand this community and what it needs. If you have a story you’d like to share with us, or you would like to join us for the next stage of our project, please get in touch. Our contact details are on the back.

John’s Story “I’m conditioned to work full time, it’s in my DNA but I was made redundant eight years ago and I’ve only had temporary jobs and agency work since. I want a full-time job. “Before last Christmas I got a temporary job as a store assistant for four months. I was doing 16 hours a week, basically three hours each afternoon. We were told some of us might be kept on but two weeks before Christmas I was told I’d be finishing on Christmas Eve. In the end none of us were kept on. How I got through those last two weeks, I don’t know. “I tried to put it to the back of my mind over Christmas but it really hit me when I went to the JobCentre again in January. I’d left my CV with them, maybe they’ll get back in touch, who knows? “Since then I’ve been looking right, left and centre. I don’t drive so that doesn’t help. “Whenever I apply for a job it seems inevitable that I’m going to get a negative reply, or worse, nothing at all. Most companies don’t even acknowledge your application. “I’ve just put my CV in at a local store because a friend of mine was leaving and she tipped me off. But it’s getting more difficult. Many of the bigger stores are closing and there are more people looking for the same jobs.” John is still actively seeking employment. He’s secured one interview in the last twelve months. He didn’t get thejob.

Ashleigh’s story “Family connections helped me get a job in hairdressing straight from school. When I started 10 years ago I was lucky to get some work experience through school but I don’t think there is much work experience in this area anymore. “I leave the house at 6.50am, take the twins to a private nursery from where they’re taken to school. Mostly I don’t get back until 8.30pm and then they’re in bed. “I’m a good distance away from the kids if anything happens during the day. I don’t drive and it takes two hours to get home on the bus. “Then two days a week I’m at college for 5.30pm. I rush to get the kids home, get somebody to watch them, and then get to college. “More nurseries and some sort of school holiday provision would make life easier. Six weeks is a long time to keep them occupied without burning a hole in your pocket. “I’d like not to work every Saturday but that’s obviously our busiest day. Sometimes we start at 7 in the morning, so I don’t see the kids at all.”

WHAT MIGHT HELP? More information about flexible and affordable childcare, childcare facilities in colleges, activities during school holidays.

Barry’s Story “I first enquired about joining the Police after leaving sixth form. They said I needed to develop some customer skills so I got a job at a supermarket and worked my way up to customer services manager. Then I got married and settled down... and started applying again. “It’s something I’ve always wanted to do: helping people, giving something back. I even volunteered at the London Olympics and paid all my own expenses. “Last year I applied to be a PC. I went to Coventry for the first interview, everyone has to, and did group tasks and short exams. I had to stay overnight because it all started at 8am. There were no expenses. I passed that and had another interview with the local force. I didn’t pass that. I have no idea why. They don’t give any feedback. That’s a lot of money and holiday used up to hear nothing back.”

WHAT MIGHT HELP? Better interview feedback? Attention to keeping interview costs down?

Grant’s Story “One of the main reasons I joined the RAF was because I was struggling to find work round here when I left college. “It’s even worse now: Eastmans has shut, Corus has gone. They were two big employers. There’s not much left. “I got some interviews for factory work locally after I left the Forces but was told I had no experience of working in a factory. I’m an aircraft engineer by trade. “The closest I could find work was in Penrith – an 80-mile round trip – where I’m a mechanical engineer maintaining the machinery in a factory that makes doors. I’d prefer to work closer to home but there’s nothing available. There’s not much call for engineers around here any more.”

When I applied for my job there was a different salary on different job websites… I didn’t mention it because I didn’t want to make trouble.

“It’s just rude when they don’t let you know. The people who interview you must know roughly how long you’ll have to wait for an answer.” “How can you improve your interview technique if you don’t know where you’ve made your mistakes?” “Why go through the stress of an interview if you know fine well someone you work with is going to get it? You just think, oh I needn’t bother because I know through local knowledge someone else is lined up for that job.” “At 16 I thought I’d go for an apprenticeship. I went for the interivew but despite emailing a few times, I didn’t get any feedback for four or five months. In the end I decided to go into sixth form.” “I found a job through word of mouth... my dad was phoning around local companies.”

“I asked for more hours but they said they couldn’t afford it. And then this morning there’s a new person arrived.”

“They’ll go round asking people to reduce their hours randomly. You don’t know where you are.”

“They shouldn’t take more people on and just give them three hour shifts. They should have fewer people but give them more hours.”

“My manager messaged me on Facebook the other day to ask me to do some overtime. Normally it’s by text or What’s App.”

“With these contracts they might only have you in for two hours each day and it’s always in the middle of the day, so you can’t do anything else. They’ve got you over a barrel.”

You stand no chance of getting a job round here unless you can drive.

I know some people who pay £50 a week on public transport.

“One bus gets me there 20 minutes before my shift starts but that’s always 15 minutes late, so I’ve had to turn up for work 40 minutes early to make sure I’m on time.” “I do nine hours a week over three shifts. I’d prefer to do it over two shifts then I’d spend less money on buses and less time wasted travelling back and forth.” “I get paid £60 a week and about £20 of it goes on buses.” “It’s 2 1/2 hours round trip on the bus they provide... and on a zero hours contract you don’t get paid for travel time.” “On my 6-9pm shift they might ask me to work late – you feel disloyal if you say no – which means I miss my last bus and have a 40 minute walk home. It’s like the dark ages.”

“The DWP still expect us to search for jobs in Lancaster. It’s four hours on the bus one way and the train goes via Carlisle so that takes nearly three hours!”

You have no chance to budget if they cut your hours and your childcare has been booked in advance.

“We’re planning a family – and will have all those childcare costs – so it puts me off moving jobs at the minute. People wonder why lots of young mums don’t work... that’s why! My friends have had to give up their jobs and get ones in the evenings but then they don’t see their families…” “Me and my mum both have jobs but she only does hours that mean she can help look after my kids.” “More nurseries and some sort of school holiday provision would make life easier. Six weeks is a long time to keep them occupied without burning a hole in your pocket.” “My brother and his wife both work but they struggled with the childcare… he got the sack because of looking after the kids.”

I was already on a warning... for taking too much time off sick. And then I was in hospital with pneumonia. If I’d put in a sick note that woud have triggered the sack. So I got my friends to cover my shifts and I had two months off without pay. It’s stressful. I’m always worried I might get the sack if I’m off again.

They don’t take well to you being off. There were times I was working so much that I was getting ill but they wouldn’t let you have a day off. I just had to try my best and not be ill.

With my medical condition sometimes I’m in agony at work and have to go home. If I apply for another job I’d be worried they might not be as understanding. Do I tell them when I’m applying and risk them not considering me or do I drop it on them the first time it happens to me at work?

They asked if I’d consider being agency staff which means they can consider you self-employed. It works to the advantage of the employer: no leave, no sick pay and they can drop you whenever they want.

What local people think about our work... We tested out some of our findings on the wider community in June 2018 at the ‘Spring Fling’ at The Oval Centre in Salterbeck, attended by around 200 local people. Here’s what some people said…

What next? These stories from the community in Mossbay and Salterbeck show that improving the employment prospects of local people is a complex task that needs many organisations to talk more, share ideas and plan together. Local residents, employers, local authorities and the voluntary sector all need to be involved.

Here are a few of our suggestions to get the conversation going.

Funded by The National Institute for Health Research Collaboration for Leadership in Applied Health Research and Care North West Coast (NIHR CLAHRC NWC). The views expressed here are those of the authors and not necessarily those of the NHS, the NIHR, or the Department of Health and Social Care.