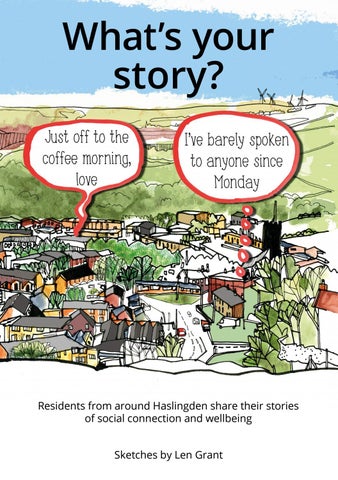 We live in a beautiful part of the world...

Haslingden has a lot going for it. We have a rich history, a diverse community, and a world-famous pie shop...

Sir Winston Churchill and Emmeline Pankhurst have both spoken at our former Public Hall which is now a busy mosque. ‘Haslingden flag’ from our quarries has been used to pave much of London, and our landmarks include The Big Lamp (okay, this one’s a replica), The Halo and Cissy Greens pie shop.

more of our primary schoolchildren are obese compared to the rest of Rossendale. 4

Our older people are poorer and die younger and, sadly, few of us would entrust keys to our neighbour.

Weâ&amp;#x20AC;&amp;#x2122;re local residents working with a bunch of professionals to tackle a tricky question: How can we, as a community, work differently with councils and the health system to improve wellbeing for us all?

We’ve been asking people what they like – and dislike – about our town and finding out some uncomfortable truths.

There are lots of positives...

...but too many people are feeling isolated and lonely.

There are dozens of other groups too

Rossendale Memory Choir Every Wednesday at the Baptist Church

but, because lots of opportunities are posted online, not everyone can get involved.

and public transport is poor. The last bus back is before my shift finishes.. so that’s another tenner for a taxi

Now they’ve changed the route, it’s another hour into Manchester

We’ve asked people about their own experiences. Here are their stories... After he’d joined the Boys Brigade at 15 and the regular army two years later, he was expecting a long military career. Tours in Belizes, Cyprus, Northern Ireland and The Falklands took their toll on him and his young family. In 1985 he chose to leave the Forces. “I went downhill quickly. I missed the lifestyle and the camaraderie. I couldn’t adapt to Civvy Street, didn’t know how to. “My mental health deteriorated and I thought the best thing to do was to leave home so I packed a bag.” With support from a childhood friend, he eventually got help and was introduced to art as part of his recovery. “I picked it up quite well, it helped. Other veterans would ask my advice and that boosted my confidence. I met Bob when he was setting up Veterans in Communities and he invited me to start an art club. “Coming here, taking responsibility for the club and encouraging other veterans has changed my life completely. I can help others who are going through the same things I was. “The art is the end result. What we’re really doing is putting purpose back in people’s lives.”

Leslie has lived in Haslingden all his life. After leaving school he joined the District Bank, later to become Nat West, where he worked as an auditor. He married Edith in 1972 and both their children, and three grandchildren, live down south. Edith died last year. Leslie has played bowls since he was in short trousers and along the way has stepped in to volunteer when needed. “One of the easiest ways of making connections is to join a group of people. Back when my son’s scout group asked for help, I ran the Venture Scouts. You do what you can. “In our retirement Edith and I enjoyed rambling – one of our many exploits – and had a big group of friends. What do they say? You don’t know what you’ve got until you’ve lost it. Yes, being lonely at times comes into it. “I never used to cook but I have to now. I’m pretty good at mashed potato usually with a ready meal from Tesco or Asda. I play bowls at least once a week and am in a couple of teams. I’m not the best player, I’ve won a few games but it does keep me connected.

“I volunteer now at the credit union and at my local church, you have to find things to pass the time, don’t you?”

“I grew up ‘up Shoot’ which had a reputation that it hasn’t yet shaken off. We were a typical working class family, we didn’t have much money. Dad worked, mum stayed at home to look after us kids. “At 16 I went to college to study childcare but suffered with mental ill health and left. I worked instead at a corner shop on the estate. “By the time I was 21 I was pregnant, single and had been made redundant. My daughter was born prematurely and I ended up with postnatal depression and in emergency housing on the other side of town. “Feeling very isolated I was introduced to Gemma who encouraged me to come to the playgroup at the Methodist Church. I was physically sick before I came to my first session. “I put on a brave face and, to make it less awkward, offered to help. I was then asked to volunteer and things started to change for me.” Since then she has gone back to college and is completing a degree in Early Years Childhood Studies, with an eye on an MA later. Still working at the playgroup, she’s using her own experiences to help local families. “Through gentle encouragement I was given the opportunity to rebuild my life. Now I’m doing the same for others.”

“Social isolation is slightly different amongst the South Asian community in Haslingden. Yes, there are opportunities available but looking after yourself doesn’t come naturally to women in our community. This is where Apna comes in.” In Urdu Apna means, ‘ours, yours, everyone’s’. Apna Rossendale works with women from a South Asian background, and others, to promote a better way of life for all. Run by the women themselves and supported by founder Arry Nessa, who was born and brought up in the town, the Apna collective uses creativity to instigate conversations about wellbeing, safety and inclusion. After staging an arts festival in a local church South Asian and local women now meet regularly at the drop-in centre for relaxed discussions and to learn from each other. “Nothing is forced, that wouldn’t work,” says Arry, “but it’s amazing when all the women get together and put the world to rights. We have a lot in common. Our next project is around food and we’ll be swapping recipes and teaching each other how to make curries and sponge cakes!”

Arriving with her young family in East Lancashire at the age of 26, Dorothy Mitchell recalls a time when the Rossendale cotton mills were still providing jobs. Now in semi-retirement, she has spent decades in the voluntary sector fundraising for numerous community initiatives. She and her partners have brought over £18 million into the area and created dozens of jobs. Awarded an MBE in 2005 for community service Dorothy knows a thing or two about social inclusion and wellbeing. “The communities around Haslingden are very discreet. There are the small villages; council estates; distinct Asian communities and luxury converted farmhouses. They all have their own connectedness but there is no inter-connectedness. “Getting people talking and keeping the needs of the individual at the forefront of all our projects has been crucially important. We’ve always adopted a person-centred approach to community development which, at the time, was ground-breaking but has now been duplicated across the UK. “If we are to make a difference for people in our community then everything we do, all the projects we create, must be based on social interaction. If you’ve got social interaction then you’ve got learning. “Yes, there are issues with the internet taking over and the pubs closing but so much can be achieved by just talking to each other, preferably around the kitchen table!”

“The council were getting rid of some planters from Haslingden town centre so I asked if I could have them for Rising Bridge and I’d fill them with new plants and maintain them. They weren’t able to help. So I did it myself. “I fixed some troughs to the railings, made some others from decking and planted them up for summer and again for winter, just as the council would do. I’m always up early so I’d water them before anyone was about and have a bit of a litter pick. “It makes the place look better for everyone, doesn’t it? “There’s a park across the main road, just with one set of goalposts. In the summer the council cut it once every four weeks so in between times it’s like a meadow and the kids can’t play football on it. “So if I’ve finished work early I’d mow the front of the goalposts so the young lads can play footie. But I was told to stop.”

Already people have made some suggestions for change...

More community spaces for people to get together Did you know the Fire Station offers free space for meetings?

More joint events for our different communities What about an Eid party for the whole town?

Our councils and the local NHS will listen to our ideas and have promised their support. Whatâ&amp;#x20AC;&amp;#x2122;s your idea for connecting us all better and making our community happier and healthier? Tell us what you think.

Call us at Haslingden Community Link on 01706 230116. Email us at info@hcl.org.uk or even pop a response through the post to CLAHRC NWC Resident Advisors, Haslingden Community Link, Bury Road, Haslingden, Lancs., BB4 5PG. Funded by The National Institute for Health Research Collaboration for Leadership in Applied Health Research and Care North West Coast (NIHR CLAHRC NWC). The views expressed here are those of the authors and not necessarily those of the NHS, the NIHR, or the Department of Health and Social Care.

As local residents we’ve been investigating how our friends and neighbours connect with each other and how this ‘social connectedness’ – or lack of it – affects wellbeing and health inequalities in our community. We’ve been supported by researchers at the Universities of Lancaster and Liverpool and by partners, Lancashire County Council, Rossendale Borough Council and Haslingden Community Link.

Residents from around Haslingden investigate how 'social connectedness' affects wellbeing and health inequalities in their community. Supported by researchers at the Universities of Lancaster and Liverpool, Lancashire County Council and Haslingden Community Link, this is part of The National Institute for Health Research Collaboration for Leadership in Applied Health Research and Care, North West Coast (NHR CLAHRC NWC).