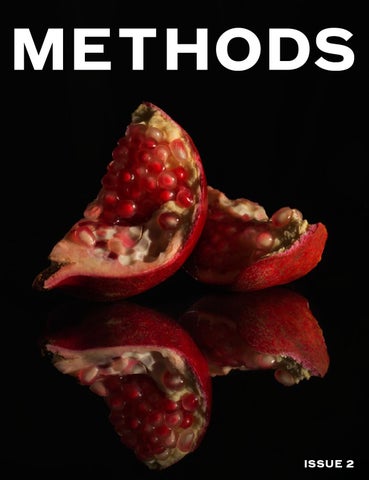 Dear Reader, Thank you for spending time with the second issue of Methods, a speculative contraceptive catalog. Erin Knutson and I started this publication in response to the comically dumb strategy of most birth control advertising. Why does euphemism serve as the primary advertising strategy for a subject that is both personally and politically vital? A photo of a smiling, ethnically ambiguous woman between the ages of 25-34 does not address any of the issues surrounding the choices that women, couples and governments make about reproduction. Searching for other possibilities, we decided to ask female artists and designers to contribute speculative contraceptive ads for the method of their choice. This way, the ads weren’t just about branded messaging, but the particular politics and ideologies that each method offers. Holistically, they are a statement on the basic right of choice. For every abstinence ad, there was a “cum on tits” ad. There were no pictures of ethnically ambiguous smiling women between the ages of 25-34. Methods was made in search of a way to start a conversation about how we treat our bodies and our relationships. The first issue was released in January 2014, and by August we felt it was time for another round. Apple and Facebook had begun to offer egg freezing benefits to their employees and Tindr was becoming more and more popular. This time, we solicited contributions from both men and women, since it takes both to make a baby. What we

received was rich and exciting. And then we kept it all stored away on our hard drives for a year. We were in our last year of graduate school and consequently thesis, jobs, moving and everything else kept getting in the way of publishing the second issue of Methods. Congress’s Planned Parenthood hearing on September 29 created a renewed sense of urgency. During more than five hours of questioning, Planned Parenthood president Cecile Richards was attacked, interrupted and talked over by House Republicans, primarily in regards to videos that were acknowledged by all parties to be heavily edited. This appalling and unsurprising display of patrimony shone a spotlight on the disease festering in our government. These same GOP members who relished in condescending to Cecile Richards on the basis of highly manipulated videos are the men who are making decisions about police brutality, immigration and a multitude of other means of controlling bodies that are not their own. And so, the second issue is born! Our ambition is that Methods can be used to start conversations that will engender change. Additionally, all proceeds ($5 from every issue purchased) are being donated to Planned Parenthood Federation of America. Look forward to more issues on a regular basis, until they aren’t needed anymore. Ria Roberts Co-founding editor

This woman and I have a platonic friendship, but we use condoms during sexual intercourse with our respective partners. Eventually I would also like a vasectomy procedure.

The anti-women’s health agenda of this Congress is a political game. To our patients, the outcome is real life. —Cecile Richards