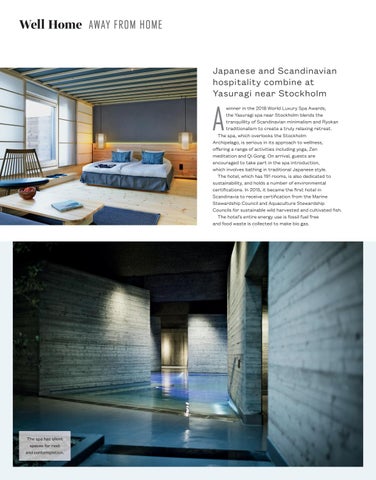 Well Home AWAY FROM HOME

Japanese and Scandinavian hospitality combine at Yasuragi near Stockholm

winner in the 2018 World Luxury Spa Awards, the Yasuragi spa near Stockholm blends the tranquillity of Scandinavian minimalism and Ryokan traditionalism to create a truly relaxing retreat. The spa, which overlooks the Stockholm Archipelago, is serious in its approach to wellness, offering a range of activities including yoga, Zen meditation and Qi Gong. On arrival, guests are encouraged to take part in the spa introduction, which involves bathing in traditional Japanese style. The hotel, which has 191 rooms, is also dedicated to sustainability, and holds a number of environmental certifications. In 2015, it became the first hotel in Scandinavia to receive certification from the Marine Stewardship Council and Aquaculture Stewardship Councils for sustainable wild harvested and cultivated fish. The hotelâ&amp;#x20AC;&amp;#x2122;s entire energy use is fossil fuel free and food waste is collected to make bio gas.

The spa has silent spaces for rest and contemplation.