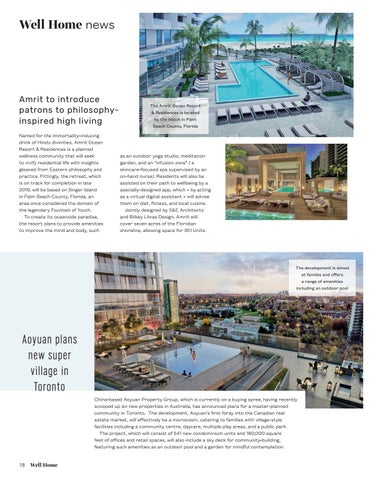 Amrit to introduce patrons to philosophyinspired high living Named for the immortality-inducing drink of Hindu divinities, Amrit Ocean Resort &amp; Residences is a planned wellness community that will seek to vivify residential life with insights gleaned from Eastern philosophy and practice. Fittingly, the retreat, which is on track for completion in late 2019, will be based on Singer Island in Palm Beach County, Florida, an area once considered the domain of the legendary Fountain of Youth. To create its oceanside paradise, the resort plans to provide amenities to improve the mind and body, such

The Amrit Ocean Resort &amp; Residences is located by the beach in Palm Beach County, Florida

as an outdoor yoga studio, meditation garden, and an “infusion zone” ( a skincare-focused spa supervised by an on-hand nurse). Residents will also be assisted on their path to wellbeing by a specially-designed app, which – by acting as a virtual digital assistant – will advise them on diet, fitness, and local cuisine. Jointly designed by S&amp;E Architects and Bilkey Llinas Design, Amrit will cover seven acres of the Floridian shoreline, allowing space for 351 Units.

Aoyuan plans new super village in Toronto China-based Aoyuan Property Group, which is currently on a buying spree, having recently scooped up six new properties in Australia, has announced plans for a master-planned community in Toronto. The development, Aoyuan’s first foray into the Canadian real estate market, will effectively be a microcosm, catering to families with village-style facilities including a community centre, daycare, multiple play areas, and a public park. The project, which will consist of 541 new condominium units and 180,000 square feet of offices and retail spaces, will also include a sky deck for community-building, featuring such amenities as an outdoor pool and a garden for mindful contemplation. 18