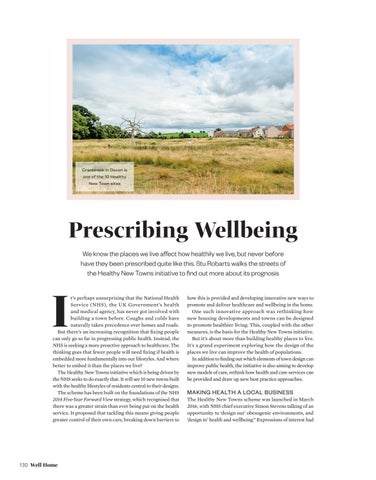 Prescribing Wellbeing We know the places we live affect how healthily we live, but never before have they been prescribed quite like this. Stu Robarts walks the streets of the Healthy New Towns initiative to find out more about its prognosis

t’s perhaps unsurprising that the National Health Service (NHS), the UK Government’s health and medical agency, has never got involved with building a town before. Coughs and colds have naturally taken precedence over homes and roads. But there’s an increasing recognition that fixing people can only go so far in progressing public health. Instead, the NHS is seeking a more proactive approach to healthcare. The thinking goes that fewer people will need fixing if health is embedded more fundamentally into our lifestyles. And where better to embed it than the places we live? The Healthy New Towns initiative which is being driven by the NHS seeks to do exactly that. It will see 10 new towns built with the healthy lifestyles of residents central to their designs. The scheme has been built on the foundations of the NHS 2014 Five-Year Forward View strategy, which recognised that there was a greater strain than ever being put on the health service. It proposed that tackling this means giving people greater control of their own care, breaking down barriers to

how this is provided and developing innovative new ways to promote and deliver healthcare and wellbeing in the home. One such innovative approach was rethinking how new housing developments and towns can be designed to promote healthier living. This, coupled with the other measures, is the basis for the Healthy New Towns initiative. But it’s about more than building healthy places to live. It’s a grand experiment exploring how the design of the places we live can improve the health of populations. In addition to finding out which elements of town design can improve public health, the initiative is also aiming to develop new models of care, rethink how health and care services can be provided and draw up new best practice approaches.

MAKING HEALTH A LOCAL BUSINESS The Healthy New Towns scheme was launched in March 2016, with NHS chief executive Simon Stevens talking of an opportunity to ‘design out’ obesogenic environments, and ‘design in’ health and wellbeing.” Expressions of interest had