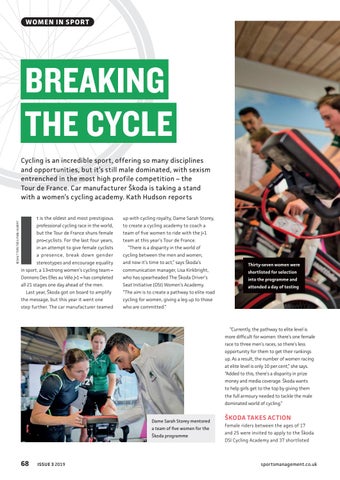 women in sp or t

BREAKING THE CYCLE Cycling is an incredible sport, offering so many disciplines and opportunities, but it’s still male dominated, with sexism entrenched in the most high profile competition – the Tour de France. Car manufacturer Škoda is taking a stand with a women’s cycling academy. Kath Hudson reports

t is the oldest and most prestigious

professional cycling race in the world,

to create a cycling academy to coach a

team of five women to ride with the J-1

pro-cyclists. For the last four years,

in an attempt to give female cyclists

“There is a disparity in the world of

a presence, break down gender

cycling between the men and women,

who has spearheaded The Škoda Driver’s

all 21 stages one day ahead of the men.

Last year, Škoda got on board to amplify

“The aim is to create a pathway to elite road

the message, but this year it went one

cycling for women, giving a leg up to those

“Currently, the pathway to elite level is more difficult for women: there’s one female race to three men’s races, so there’s less opportunity for them to get their rankings up. As a result, the number of women racing at elite level is only 10 per cent,” she says. “Added to this, there’s a disparity in prize money and media coverage. Škoda wants to help girls get to the top by giving them the full armoury needed to tackle the male dominated world of cycling.”