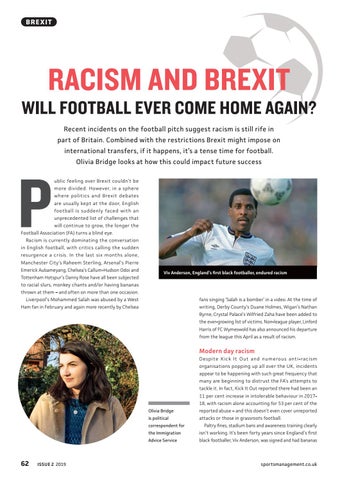 WILL FOOTBALL EVER COME HOME AGAIN? Recent incidents on the football pitch suggest racism is still rife in part of Britain. Combined with the restrictions Brexit might impose on international transfers, if it happens, it’s a tense time for football. Olivia Bridge looks at how this could impact future success

ublic feeling over Brexit couldn’t be more divided. However, in a sphere where politics and Brexit debates are usually kept at the door, English football is suddenly faced with an unprecedented list of challenges that will continue to grow, the longer the

to racial slurs, monkey chants and/or having bananas thrown at them – and often on more than one occasion. Liverpool’s Mohammed Salah was abused by a West

fans singing ‘Salah is a bomber’ in a video. At the time of

Ham fan in February and again more recently by Chelsea

writing, Derby County’s Duane Holmes, Wigan’s Nathan Byrne, Crystal Palace’s Wilfried Zaha have been added to the ever-growing list of victims. Non-league player, Linford Harris of FC Wymeswold has also announced his departure from the league this April as a result of racism.

Modern day racism Despite Kick It Out and numerous anti-racism organisations popping up all over the UK, incidents appear to be happening with such great frequency that many are beginning to distrust the FA’s attempts to tackle it. In fact, Kick It Out reported there had been an 11 per cent increase in intolerable behaviour in 201718, with racism alone accounting for 53 per cent of the Olivia Bridge

reported abuse – and this doesn’t even cover unreported

attacks or those in grassroots football.

black footballer, Viv Anderson, was signed and had bananas