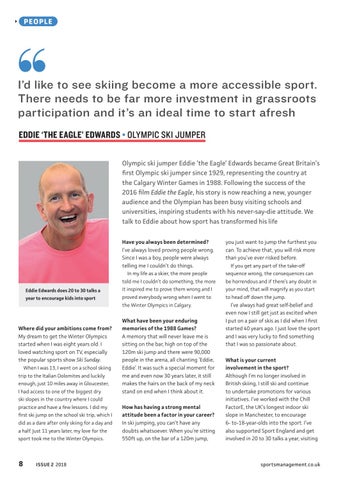 I’d like to see skiing become a more accessible sport. There needs to be far more investment in grassroots participation and it’s an ideal time to start afresh Eddie ‘the Eagle’ Edwards • Olympic ski jumper Olympic ski jumper Eddie ‘the Eagle’ Edwards became Great Britain’s first Olympic ski jumper since 1929, representing the country at the Calgary Winter Games in 1988. Following the success of the 2016 film Eddie the Eagle, his story is now reaching a new, younger audience and the Olympian has been busy visiting schools and universities, inspiring students with his never-say-die attitude. We talk to Eddie about how sport has transformed his life Have you always been determined? I’ve always loved proving people wrong. Since I was a boy, people were always telling me I couldn’t do things. In my life as a skier, the more people

If you get any part of the take-off sequence wrong, the consequences can

told me I couldn’t do something, the more

be horrendous and if there’s any doubt in

it inspired me to prove them wrong and I

your mind, that will magnify as you start

year to encourage kids into sport

proved everybody wrong when I went to

to head off down the jump.

the Winter Olympics in Calgary.

I’ve always had great self-belief and even now I still get just as excited when I put on a pair of skis as I did when I first started 40 years ago. I just love the sport and I was very lucky to find something that I was so passionate about.

Where did your ambitions come from? My dream to get the Winter Olympics started when I was eight years old. I loved watching sport on TV, especially the popular sports show Ski Sunday. When I was 13, I went on a school skiing trip to the Italian Dolomites and luckily enough, just 10 miles away in Gloucester, I had access to one of the biggest dry

What have been your enduring memories of the 1988 Games? A memory that will never leave me is sitting on the bar, high on top of the 120m ski jump and there were 90,000 people in the arena, all chanting ‘Eddie, Eddie’. It was such a special moment for me and even now 30 years later, it still makes the hairs on the back of my neck stand on end when I think about it.

ski slopes in the country where I could practice and have a few lessons. I did my first ski jump on the school ski trip, which I did as a dare after only skiing for a day and a half. Just 11 years later, my love for the sport took me to the Winter Olympics.

you just want to jump the furthest you can. To achieve that, you will risk more than you’ve ever risked before.

How has having a strong mental attitude been a factor in your career? In ski jumping, you can’t have any doubts whatsoever. When you’re sitting 550ft up, on the bar of a 120m jump,

What is your current involvement in the sport? Although I’m no longer involved in British skiing, I still ski and continue to undertake promotions for various initiatives. I’ve worked with the Chill FactorE, the UK’s longest indoor ski slope in Manchester, to encourage 6- to-18-year-olds into the sport. I’ve also supported Sport England and get involved in 20 to 30 talks a year, visiting