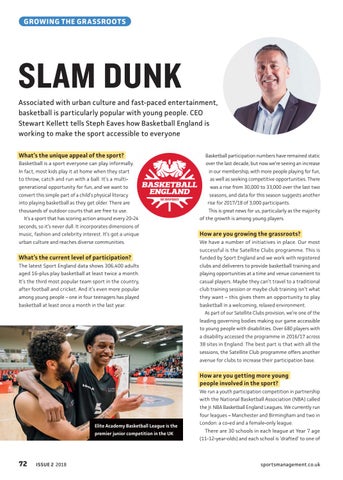 Slam dunk Associated with urban culture and fast-paced entertainment, basketball is particularly popular with young people. CEO Stewart Kellett tells Steph Eaves how Basketball England is working to make the sport accessible to everyone What’s the unique appeal of the sport?

Basketball is a sport everyone can play informally.

over the last decade, but now we’re seeing an increase

In fact, most kids play it at home when they start

in our membership, with more people playing for fun,

to throw, catch and run with a ball. It’s a multi-

as well as seeking competitive opportunities. There

generational opportunity for fun, and we want to

convert this simple part of a child’s physical literacy

seasons, and data for this season suggests another

into playing basketball as they get older. There are

thousands of outdoor courts that are free to use.

This is great news for us, particularly as the majority

of the growth is among young players.

seconds, so it’s never dull. It incorporates dimensions of music, fashion and celebrity interest. It’s got a unique

How are you growing the grassroots?

We have a number of initiatives in place. Our most successful is the Satellite Clubs programme. This is

What’s the current level of participation?

funded by Sport England and we work with registered

clubs and deliverers to provide basketball training and

aged 16-plus play basketball at least twice a month.

playing opportunities at a time and venue convenient to

It’s the third most popular team sport in the country,

casual players. Maybe they can’t travel to a traditional

after football and cricket. And it’s even more popular

among young people – one in four teenagers has played

they want – this gives them an opportunity to play

basketball at least once a month in the last year.

basketball in a welcoming, relaxed environment. As part of our Satellite Clubs provision, we’re one of the leading governing bodies making our game accessible to young people with disabilities. Over 680 players with a disability accessed the programme in 2016/17 across 38 sites in England. The best part is that with all the sessions, the Satellite Club programme offers another avenue for clubs to increase their participation base.

How are you getting more young people involved in the sport? We run a youth participation competition in partnership with the National Basketball Association (NBA) called the Jr. NBA Basketball England Leagues. We currently run four leagues – Manchester and Birmingham and two in Elite Academy Basketball League is the premier junior competition in the UK

London: a co-ed and a female-only league. There are 30 schools in each league at Year 7 age (11-12-year-olds) and each school is ‘drafted’ to one of