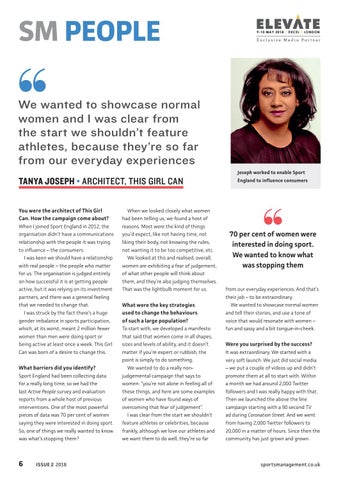 We wanted to showcase normal women and I was clear from the start we shouldn’t feature athletes, because they’re so far from our everyday experiences Joseph worked to enable Sport

Tanya Joseph • architect, this Girl Can You were the architect of This Girl Can. How the campaign come about?

had been telling us, we found a host of

When I joined Sport England in 2012, the

reasons. Most were the kind of things

organisation didn’t have a communications

relationship with the people it was trying

liking their body, not knowing the rules,

to influence – the consumers.

not wanting it to be too competitive, etc.

I was keen we should have a relationship

When we looked closely what women

We looked at this and realised, overall,

with real people – the people who matter

women are exhibiting a fear of judgement,

for us. The organisation is judged entirely

of what other people will think about

on how successful it is at getting people

them, and they’re also judging themselves.

active, but it was relying on its investment

That was the lightbulb moment for us.

70 per cent of women were interested in doing sport. We wanted to know what was stopping them from our everyday experiences. And that’s their job – to be extraordinary.

partners, and there was a general feeling

and tell their stories, and use a tone of

What were the key strategies used to change the behaviours of such a large population?

which, at its worst, meant 2 million fewer

To start with, we developed a manifesto

fun and sassy and a bit tongue-in-cheek.

women than men were doing sport or

that said that women come in all shapes,

being active at least once a week. This Girl

sizes and levels of ability, and it doesn’t

Were you surprised by the success?

Can was born of a desire to change this.

matter if you’re expert or rubbish, the

It was extraordinary. We started with a

point is simply to do something.

We wanted to do a really non-

– we put a couple of videos up and didn’t

Sport England had been collecting data

judgemental campaign that says to

promote them at all to start with. Within

for a really long time, so we had the

women: “you’re not alone in feeling all of

these things, and here are some examples

followers and I was really happy with that.

reports from a whole host of previous

of women who have found ways of

Then we launched the above the line

interventions. One of the most powerful

overcoming that fear of judgement”.

campaign starting with a 90 second TV

that we needed to change that. I was struck by the fact there’s a huge

What barriers did you identify?

pieces of data was 70 per cent of women

I was clear from the start we shouldn’t

ad during Coronation Street. And we went

feature athletes or celebrities, because

So, one of things we really wanted to know

frankly, although we love our athletes and

was what’s stopping them?

we want them to do well, they’re so far

community has just grown and grown.