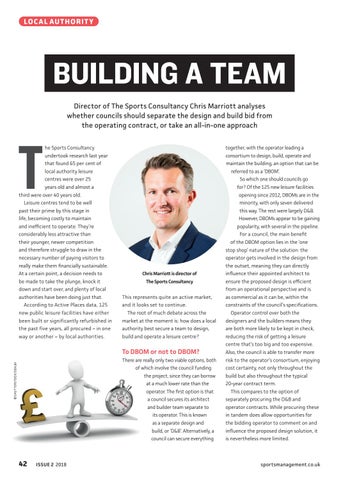 building a team Director of The Sports Consultancy Chris Marriott analyses whether councils should separate the design and build bid from the operating contract, or take an all-in-one approach

together, with the operator leading a

consortium to design, build, operate and

that found 65 per cent of

maintain the building, an option that can be referred to as a ‘DBOM’.

local authority leisure centres were over 25

So which one should councils go

years old and almost a

for? Of the 125 new leisure facilities

third were over 40 years old.

Leisure centres tend to be well

minority, with only seven delivered

past their prime by this stage in

this way. The rest were largely D&B.

However, DBOMs appear to be gaining

and inefficient to operate. They’re

popularity, with several in the pipeline.

For a council, the main benefit

of the DBOM option lies in the ‘one

and therefore struggle to draw in the

stop shop’ nature of the solution: the

necessary number of paying visitors to

operator gets involved in the design from

the outset, meaning they can directly

At a certain point, a decision needs to

Chris Marriott is director of

influence their appointed architect to

be made to take the plunge, knock it

ensure the proposed design is efficient

down and start over, and plenty of local authorities have been doing just that. According to Active Places data, 125 new public leisure facilities have either

from an operational perspective and is This represents quite an active market,

as commercial as it can be, within the

and it looks set to continue.

constraints of the council’s specifications.

The root of much debate across the

Operator control over both the

been built or significantly refurbished in

market at the moment is: how does a local

designers and the builders means they

the past five years, all procured – in one

are both more likely to be kept in check,

way or another – by local authorities.

build and operate a leisure centre?

reducing the risk of getting a leisure

centre that’s too big and too expensive.

To DBOM or not to DBOM?

Also, the council is able to transfer more

There are really only two viable options, both

risk to the operator’s consortium, enjoying

of which involve the council funding the project, since they can borrow at a much lower rate than the operator. The first option is that

a council secures its architect

separately procuring the D&B and

and builder team separate to

operator contracts. While procuring these

its operator. This is known

in tandem does allow opportunities for

as a separate design and

influence the proposed design solution, it

council can secure everything