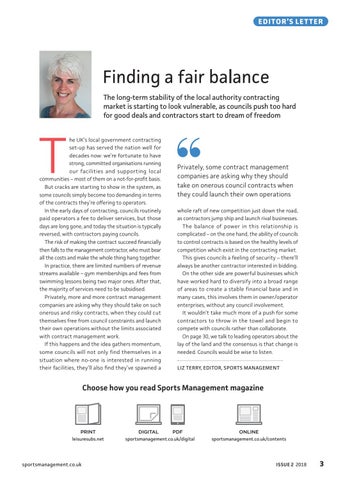 Finding a fair balance The long-term stability of the local authority contracting market is starting to look vulnerable, as councils push too hard for good deals and contractors start to dream of freedom

he UK’s local government contracting set-up has served the nation well for decades now: we’re fortunate to have strong, committed organisations running our facilities and supporting local communities – most of them on a not-for-profit basis. But cracks are starting to show in the system, as some councils simply become too demanding in terms of the contracts they’re offering to operators. In the early days of contracting, councils routinely paid operators a fee to deliver services, but those days are long gone, and today the situation is typically reversed, with contractors paying councils. The risk of making the contract succeed financially then falls to the management contractor, who must bear all the costs and make the whole thing hang together. In practice, there are limited numbers of revenue streams available – gym memberships and fees from swimming lessons being two major ones. After that, the majority of services need to be subsidised. Privately, more and more contract management companies are asking why they should take on such onerous and risky contracts, when they could cut themselves free from council constraints and launch their own operations without the limits associated with contract management work. If this happens and the idea gathers momentum, some councils will not only find themselves in a situation where no-one is interested in running their facilities, they’ll also find they’ve spawned a

Privately, some contract management companies are asking why they should take on onerous council contracts when they could launch their own operations whole raft of new competition just down the road, as contractors jump ship and launch rival businesses. The balance of power in this relationship is complicated – on the one hand, the ability of councils to control contracts is based on the healthy levels of competition which exist in the contracting market. This gives councils a feeling of security – there’ll always be another contractor interested in bidding. On the other side are powerful businesses which have worked hard to diversify into a broad range of areas to create a stable financial base and in many cases, this involves them in owner/operator enterprises, without any council involvement. It wouldn’t take much more of a push for some contractors to throw in the towel and begin to compete with councils rather than collaborate. On page 30, we talk to leading operators about the lay of the land and the consensus is that change is needed. Councils would be wise to listen. LIZ TERRY, EDITOR, SPORTS MANAGEMENT