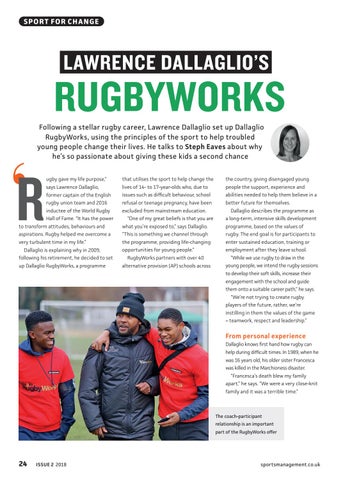 sp or t for ch a nge

RugbyWorks Following a stellar rugby career, Lawrence Dallaglio set up Dallaglio RugbyWorks, using the principles of the sport to help troubled young people change their lives. He talks to Steph Eaves about why he’s so passionate about giving these kids a second chance

that utilises the sport to help change the

people the support, experience and

former captain of the English

issues such as difficult behaviour, school

abilities needed to help them believe in a

refusal or teenage pregnancy, have been

better future for themselves.

inductee of the World Rugby

Hall of Fame. “It has the power

“One of my great beliefs is that you are

Dallaglio describes the programme as a long-term, intensive skills development

to transform attitudes, behaviours and

what you’re exposed to,” says Dallaglio.

programme, based on the values of

aspirations. Rugby helped me overcome a

“This is something we channel through

rugby. The end goal is for participants to

very turbulent time in my life.”

employment after they leave school.

Dallaglio is explaining why in 2009, following his retirement, he decided to set up Dallaglio RugbyWorks, a programme

RugbyWorks partners with over 40 alternative provision (AP) schools across

“While we use rugby to draw in the young people, we intend the rugby sessions to develop their soft skills, increase their engagement with the school and guide them onto a suitable career path,” he says. “We’re not trying to create rugby players of the future, rather, we’re instilling in them the values of the game – teamwork, respect and leadership.”

From personal experience Dallaglio knows first hand how rugby can help during difficult times. In 1989, when he was 16 years old, his older sister Francesca was killed in the Marchioness disaster. “Francesca’s death blew my family apart,” he says. “We were a very close-knit family and it was a terrible time.”