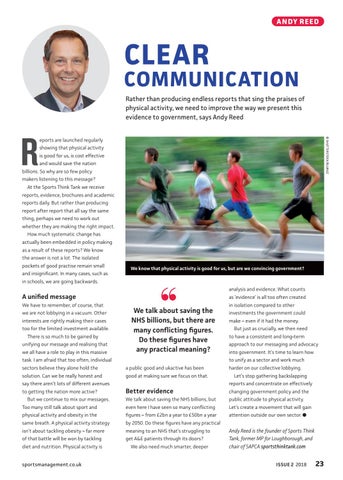 COMMUNICATION Rather than producing endless reports that sing the praises of physical activity, we need to improve the way we present this evidence to government, says Andy Reed © SHUTTERSTOCK/BLURAZ

eports are launched regularly showing that physical activity is good for us, is cost effective and would save the nation

billions. So why are so few policy makers listening to this message? At the Sports Think Tank we receive reports, evidence, brochures and academic reports daily. But rather than producing report after report that all say the same thing, perhaps we need to work out whether they are making the right impact. How much systematic change has actually been embedded in policy making as a result of these reports? We know the answer is not a lot. The isolated pockets of good practise remain small and insignificant. In many cases, such as

We know that physical activity is good for us, but are we convincing government?

in schools, we are going backwards. analysis and evidence. What counts

A unified message We have to remember, of course, that we are not lobbying in a vacuum. Other interests are rightly making their cases too for the limited investment available. There is so much to be gained by unifying our message and realising that we all have a role to play in this massive

as ‘evidence’ is all too often created

We talk about saving the NHS billions, but there are many conflicting figures. Do these figures have any practical meaning?

in isolation compared to other investments the government could make – even if it had the money. But just as crucially, we then need to have a consistent and long-term approach to our messaging and advocacy into government. It’s time to learn how to unify as a sector and work much

task. I am afraid that too often, individual sectors believe they alone hold the

a public good and ukactive has been

solution. Can we be really honest and

good at making sure we focus on that.

We talk about saving the NHS billions, but

Too many still talk about sport and

even here I have seen so many conflicting

Let’s create a movement that will gain

physical activity and obesity in the

attention outside our own sector. ●

by 2050. Do these figures have any practical

meaning to an NHS that’s struggling to

of that battle will be won by tackling

get A&E patients through its doors?

to getting the nation more active? But we continue to mix our messages.

diet and nutrition. Physical activity is

We also need much smarter, deeper

Andy Reed is the founder of Sports Think Tank, former MP for Loughborough, and chair of SAPCA sportsthinktank.com ISSUE 2 2018