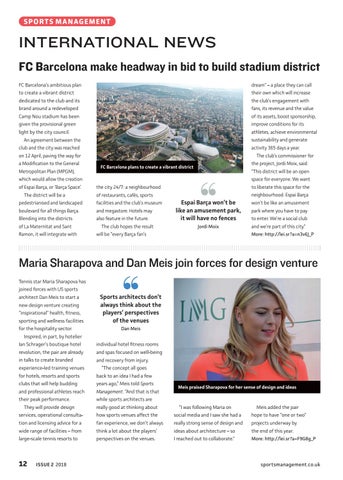 dream” – a place they can call

to create a vibrant district

their own which will increase

dedicated to the club and its

the club’s engagement with

brand around a redeveloped

fans, its revenue and the value

Camp Nou stadium has been

of its assets, boost sponsorship,

given the provisional green

improve conditions for its

light by the city council.

An agreement between the

club and the city was reached

The club’s commissioner for

on 12 April, paving the way for a Modification to the General Metropolitan Plan (MPGM),

“This district will be an open space for everyone. We want

which would allow the creation of Espai Barça, or ‘Barça Space’. The district will be a

facilities and the club’s museum

boulevard for all things Barça.

and megastore. Hotels may

Blending into the districts

also feature in the future.

Ramon, it will integrate with

of La Maternitat and Sant

to liberate this space for the

the city 24/7: a neighbourhood

The club hopes the result

Espai Barça won’t be like an amusement park, it will have no fences Jordi Moix

will be “every Barça fan’s

won’t be like an amusement park where you have to pay to enter. We’re a social club and we’re part of this city.” More: http://lei.sr?a=n3v6J_P

revolution, the pair are already

and spas focused on well-being

in talks to create branded

and recovery from injury.

“The concept all goes

for hotels, resorts and sports

back to an idea I had a few

clubs that will help budding

Management. “And that is that

while sports architects are

They will provide design

really good at thinking about

Meis praised Sharapova for her sense of design and ideas

“I was following Maria on

how sports venues affect the

social media and I saw she had a

hope to have “one or two”

tion and licensing advice for a

really strong sense of design and

wide range of facilities – from

think a lot about the players’

ideas about architecture – so

the end of this year.

perspectives on the venues.

I reached out to collaborate.”