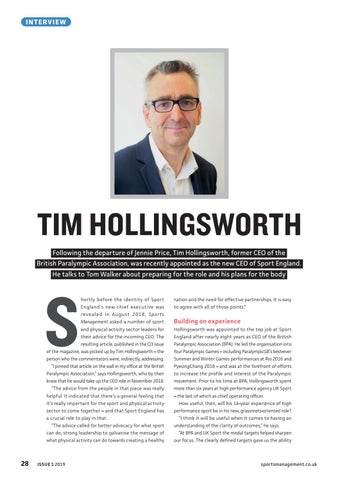 Tim Hollingsworth Following the departure of Jennie Price, Tim Hollingsworth, former CEO of the British Paralympic Association, was recently appointed as the new CEO of Sport England. He talks to Tom Walker about preparing for the role and his plans for the body

hortly before the identity of Sport

nation and the need for effective partnerships. It is easy

to agree with all of those points.”

revealed in August 2018, Sports Management asked a number of sport

and physical activity sector leaders for

Hollingsworth was appointed to the top job at Sport

their advice for the incoming CEO. The

England after nearly eight years as CEO of the British

Paralympic Association (BPA). He led the organisation into

of the magazine, was picked up by Tim Hollingsworth – the

person who the commentators were, indirectly, addressing.

Summer and Winter Games performances at Rio 2016 and

PyeongChang 2018 – and was at the forefront of efforts

Paralympic Association,” says Hollingsworth, who by then

to increase the profile and interest of the Paralympic

knew that he would take up the CEO role in November 2018.

movement. Prior to his time at BPA, Hollingsworth spent

“The advice from the people in that piece was really

helpful. It indicated that there’s a general feeling that

How useful, then, will his 14-year experience of high

sector to come together – and that Sport England has

performance sport be in his new, grassroots-oriented role?

a crucial role to play in that. “The advice called for better advocacy for what sport

– the last of which as chief operating officer.

it’s really important for the sport and physical activity

“I think it will be useful when it comes to having an understanding of the clarity of outcomes,” he says.

can do, strong leadership to galvanise the message of

“At BPA and UK Sport the medal targets helped sharpen

what physical activity can do towards creating a healthy

our focus. The clearly defined targets gave us the ability