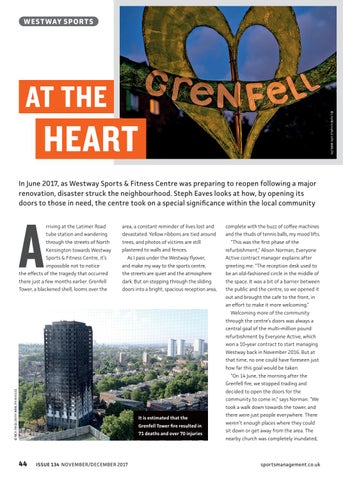 HEART In June 2017, as Westway Sports & Fitness Centre was preparing to reopen following a major renovation, disaster struck the neighbourhood. Steph Eaves looks at how, by opening its doors to those in need, the centre took on a special significance within the local community

rriving at the Latimer Road

area, a constant reminder of lives lost and

complete with the buzz of coffee machines

devastated. Yellow ribbons are tied around

and the thuds of tennis balls, my mood lifts.

through the streets of North

trees, and photos of victims are still

plastered to walls and fences.

As I pass under the Westway flyover,

“This was the first phase of the refurbishment,” Alison Norman, Everyone Active contract manager explains after

and make my way to the sports centre,

greeting me. “The reception desk used to

the effects of the tragedy that occurred

the streets are quiet and the atmosphere

be an old-fashioned circle in the middle of

dark. But on stepping through the sliding

the space. It was a bit of a barrier between

Tower, a blackened shell, looms over the

the public and the centre, so we opened it

impossible not to notice

out and brought the cafe to the front, in an effort to make it more welcoming.” Welcoming more of the community through the centre’s doors was always a central goal of the multi-million pound refurbishment by Everyone Active, which won a 10-year contract to start managing Westway back in November 2016. But at that time, no one could have foreseen just how far this goal would be taken. “On 14 June, the morning after the Grenfell fire, we stopped trading and © Rick Findler/PA Wire/PA Images

decided to open the doors for the community to come in,” says Norman. “We took a walk down towards the tower, and It is estimated that the Grenfell Tower fire resulted in 71 deaths and over 70 injuries

there were just people everywhere. There weren’t enough places where they could sit down or get away from the area. The nearby church was completely inundated,