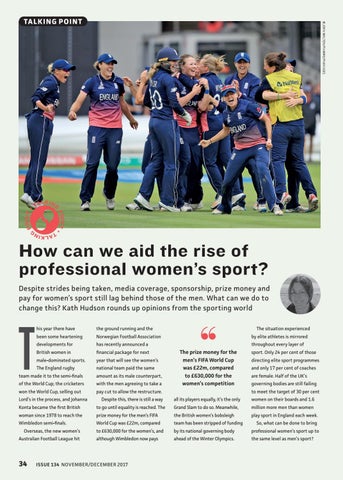 How can we aid the rise of professional women’s sport? Despite strides being taken, media coverage, sponsorship, prize money and pay for women’s sport still lag behind those of the men. What can we do to change this? Kath Hudson rounds up opinions from the sporting world

his year there have

the ground running and the

has recently announced a

financial package for next

year that will see the women’s

team made it to the semi-finals

amount as its male counterpart,

of the World Cup; the cricketers

with the men agreeing to take a

won the World Cup, selling out

pay cut to allow the restructure.

Lord’s in the process, and Johanna

sport. Only 24 per cent of those directing elite sport programmes and only 17 per cent of coaches are female. Half of the UK’s governing bodies are still failing to meet the target of 30 per cent

Despite this, there is still a way

all its players equally, it’s the only

women on their boards and 1.6

to go until equality is reached. The

Grand Slam to do so. Meanwhile,

prize money for the men’s FIFA

play sport in England each week.

team has been stripped of funding

by its national governing body

professional women’s sport up to

ahead of the Winter Olympics.

the same level as men’s sport?

So, what can be done to bring