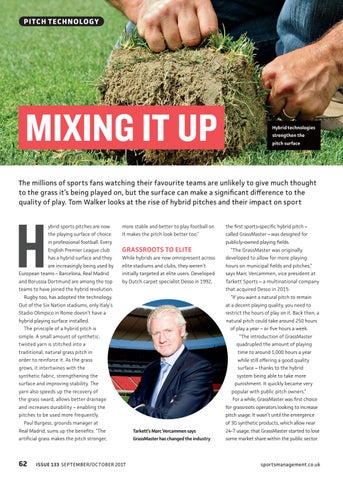 The millions of sports fans watching their favourite teams are unlikely to give much thought to the grass it’s being played on, but the surface can make a significant difference to the quality of play. Tom Walker looks at the rise of hybrid pitches and their impact on sport

more stable and better to play football on.

the playing surface of choice

It makes the pitch look better too.”

has a hybrid surface and they

While hybrids are now omnipresent across

developed to allow for more playing

are increasingly being used by

elite stadiums and clubs, they weren’t

hours on municipal fields and pitches,”

and Borussia Dortmund are among the top

by Dutch carpet specialist Desso in 1992,

Tarkett Sports – a multinational company that acquired Desso in 2015.

teams to have joined the hybrid revolution. Rugby too, has adopted the technology.

“If you want a natural pitch to remain

Out of the Six Nation stadiums, only Italy’s

at a decent playing quality, you need to

Stadio Olimpico in Rome doesn’t have a

restrict the hours of play on it. Back then, a

natural pitch could take around 250 hours of play a year – or five hours a week.

The principle of a hybrid pitch is simple. A small amount of synthetic,

twisted yarn is stitched into a

quadrupled the amount of playing

order to reinforce it. As the grass

while still offering a good quality

grows, it intertwines with the

surface – thanks to the hybrid

system being able to take more

surface and improving stability. The

yarn also speeds up the recovery of

For a while, GrassMaster was first choice

and increases durability – enabling the

for grassroots operators looking to increase

pitches to be used more frequently.

pitch usage. It wasn’t until the emergence

of 3G synthetic products, which allow near

Real Madrid, sums up the benefits: “The

24-7 usage, that GrassMaster started to lose

GrassMaster has changed the industry