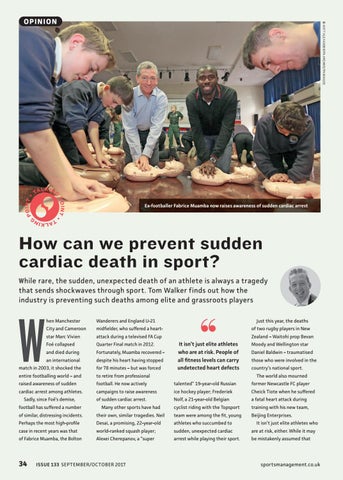 How can we prevent sudden cardiac death in sport? While rare, the sudden, unexpected death of an athlete is always a tragedy that sends shockwaves through sport. Tom Walker finds out how the industry is preventing such deaths among elite and grassroots players

Wanderers and England U-21

midfielder, who suffered a heart-

of two rugby players in New

attack during a televised FA Cup

despite his heart having stopped

Just this year, the deaths

It isn’t just elite athletes who are at risk. People of all fitness levels can carry undetected heart defects

for 78 minutes – but was forced

to retire from professional

Cheick Tiote when he suffered

a fatal heart attack during

football has suffered a number

Many other sports have had

cyclist riding with the Topsport

training with his new team,

their own, similar tragedies. Neil

team were among the fit, young

Perhaps the most high-profile

athletes who succumbed to

case in recent years was that

are at risk, either. While it may

of Fabrice Muamba, the Bolton

arrest while playing their sport.

be mistakenly assumed that

It isn’t just elite athletes who