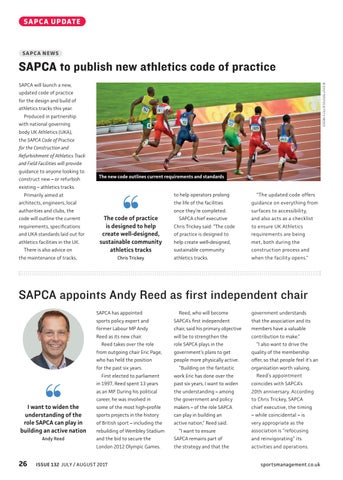 SAPCA will launch a new, updated code of practice for the design and build of athletics tracks this year. Produced in partnership with national governing body UK Athletics (UKA), the SAPCA Code of Practice for the Construction and Refurbishment of Athletics Track and Field Facilities will provide guidance to anyone looking to construct new – or refurbish

the life of the facilities

guidance on everything from

authorities and clubs, the

There is also advice on

the maintenance of tracks,

code will outline the current requirements, specifications and UKA standards laid out for athletics facilities in the UK.

and also acts as a checklist

of practice is designed to

met, both during the

when the facility opens.”

that the association and its

members have a valuable

Reed as its new chair.

will be to strengthen the

contribution to make.” “I also want to drive the

government’s plans to get

quality of the membership

who has held the position

offer, so that people feel it’s an

role SAPCA plays in the

from outgoing chair Eric Page, for the past six years.

Reed takes over the role

Reed, who will become

“Building on the fantastic work Eric has done over the

past six years, I want to widen

as an MP. During his political

career, he was involved in

some of the most high-profile

makers – of the role SAPCA

sports projects in the history

can play in building an

of British sport – including the

very appropriate as the

“I want to ensure

and the bid to secure the

the strategy and that the