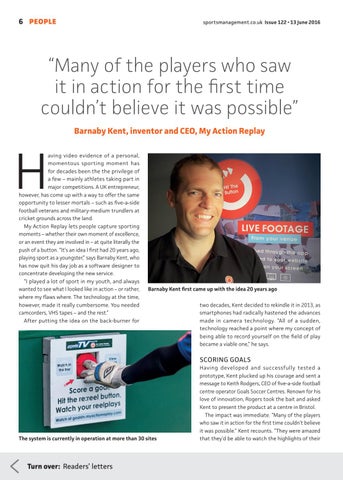 “Many of the players who saw it in action for the first time couldn’t believe it was possible” Barnaby Kent, inventor and CEO, My Action Replay

aving video evidence of a personal, momentous sporting moment has for decades been the the privilege of a few – mainly athletes taking part in major competitions. A UK entrepreneur, however, has come up with a way to offer the same opportunity to lesser mortals – such as five-a-side football veterans and military-medium trundlers at cricket grounds across the land. My Action Replay lets people capture sporting moments – whether their own moment of excellence, or an event they are involved in – at quite literally the push of a button. “It’s an idea I first had 20 years ago, playing sport as a youngster,” says Barnaby Kent, who has now quit his day job as a software designer to concentrate developing the new service. “I played a lot of sport in my youth, and always wanted to see what I looked like in action – or rather, where my flaws where. The technology at the time, however, made it really cumbersome. You needed camcorders, VHS tapes – and the rest.” After putting the idea on the back-burner for

Barnaby Kent first came up with the idea 20 years ago two decades, Kent decided to rekindle it in 2013, as smartphones had radically hastened the advances made in camera technology. “All of a sudden, technology reached a point where my concept of being able to record yourself on the field of play became a viable one,” he says.

The system is currently in operation at more than 30 sites

Having developed and successfully tested a prototype, Kent plucked up his courage and sent a message to Keith Rodgers, CEO of five-a-side football centre operator Goals Soccer Centres. Renown for his love of innovation, Rogers took the bait and asked Kent to present the product at a centre in Bristol. The impact was immediate. “Many of the players who saw it in action for the first time couldn’t believe it was possible.” Kent recounts. “They were amazed that they’d be able to watch the highlights of their