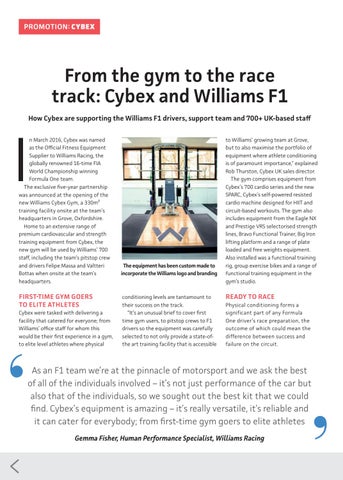 From the gym to the race track: Cybex and Williams F1 How Cybex are supporting the Williams F1 drivers, support team and 700+ UK-based staff

n March 2016, Cybex was named as the Official Fitness Equipment Supplier to Williams Racing, the globally renowned 16-time FIA World Championship winning Formula One team. The exclusive five-year partnership was announced at the opening of the new Williams Cybex Gym, a 330m² training facility onsite at the team’s headquarters in Grove, Oxfordshire. Home to an extensive range of premium cardiovascular and strength training equipment from Cybex, the new gym will be used by Williams’ 700 staff, including the team’s pitstop crew and drivers Felipe Massa and Valtteri Bottas when onsite at the team’s headquarters.

First-time gym goers to elite atHletes Cybex were tasked with delivering a facility that catered for everyone; from Williams’ office staff for whom this would be their first experience in a gym, to elite level athletes where physical

conditioning levels are tantamount to their success on the track. “It’s an unusual brief to cover first time gym users, to pitstop crews to F1 drivers so the equipment was carefully selected to not only provide a state-ofthe art training facility that is accessible

ready to raCe Physical conditioning forms a significant part of any Formula One driver’s race preparation, the outcome of which could mean the difference between success and failure on the circuit.

As an F1 team we’re at the pinnacle of motorsport and we ask the best of all of the individuals involved – it’s not just performance of the car but also that of the individuals, so we sought out the best kit that we could find. Cybex’s equipment is amazing – it’s really versatile, it’s reliable and it can cater for everybody; from first-time gym goers to elite athletes Gemma Fisher, Human Performance Specialist, Williams Racing