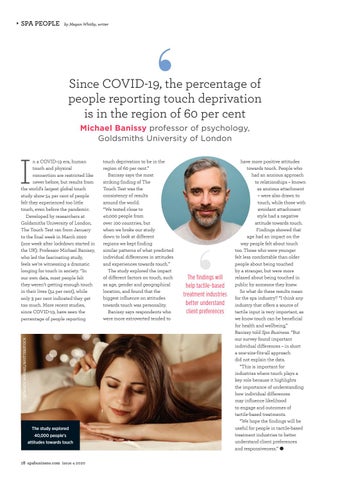 Since COVID-19, the percentage of people reporting touch deprivation is in the region of 60 per cent Michael Banissy professor of psychology, Goldsmiths University of London

n a COVID-19 era, human touch and physical connection are restricted like never before, but results from the world’s largest global touch study show 54 per cent of people felt they experienced too little touch, even before the pandemic. Developed by researchers at Goldsmiths University of London, The Touch Test ran from January to the final week in March 2020 (one week after lockdown started in the UK). Professor Michael Banissy, who led the fascinating study, feels we’re witnessing a dramatic longing for touch in society. “In our own data, most people felt they weren’t getting enough touch in their lives (54 per cent), while only 3 per cent indicated they get too much. More recent studies, since COVID-19, have seen the percentage of people reporting

touch deprivation to be in the region of 60 per cent.” Banissy says the most striking finding of The Touch Test was the consistency of results around the world. “We tested close to 40,000 people from over 100 countries, but when we broke our study down to look at different regions we kept finding similar patterns of what predicted individual differences in attitudes and experiences towards touch.” The study explored the impact of different factors on touch, such as age, gender and geographical location, and found that the biggest influence on attitudes towards touch was personality. Banissy says respondents who were more extroverted tended to

have more positive attitudes towards touch. People who had an anxious approach to relationships – known as anxious attachment – were also drawn to touch, while those with avoidant attachment style had a negative attitude towards touch. Findings showed that age had an impact on the way people felt about touch too. Those who were younger felt less comfortable than older people about being touched by a stranger, but were more relaxed about being touched in public by someone they knew. So what do these results mean for the spa industry? “I think any industry that offers a source of tactile input is very important, as we know touch can be beneficial for health and wellbeing,” Banissy told Spa Business. “But our survey found important individual differences – in short a one-size-fits-all approach did not explain the data. “This is important for industries where touch plays a key role because it highlights the importance of understanding how individual differences may influence likelihood to engage and outcomes of tactile-based treatments. “We hope the findings will be useful for people in tactile-based treatment industries to better understand client preferences and responsiveness.” l