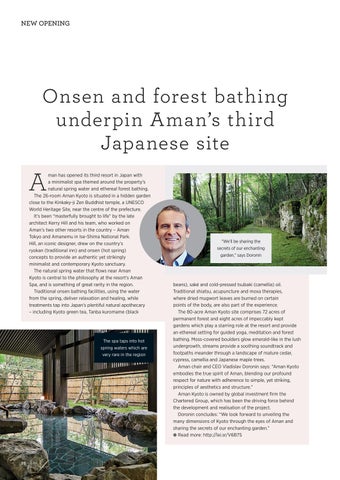 man has opened its third resort in Japan with a minimalist spa themed around the property’s natural spring water and ethereal forest bathing. The 26-room Aman Kyoto is situated in a hidden garden close to the Kinkaky-ji Zen Buddhist temple, a UNESCO World Heritage Site, near the centre of the prefecture. It’s been “masterfully brought to life” by the late architect Kerry Hill and his team, who worked on Aman’s two other resorts in the country – Aman Tokyo and Amanemu in Ise-Shima National Park. Hill, an iconic designer, drew on the country’s ryokan (traditional inn) and onsen (hot spring) concepts to provide an authentic yet strikingly minimalist and contemporary Kyoto sanctuary. The natural spring water that flows near Aman Kyoto is central to the philosophy at the resort’s Aman Spa, and is something of great rarity in the region. Traditional onsen bathing facilities, using the water from the spring, deliver relaxation and healing, while treatments tap into Japan’s plentiful natural apothecary – including Kyoto green tea, Tanba kuromame (black

“We’ll be sharing the secrets of our enchanting garden,” says Doronin

beans), saké and cold-pressed tsubaki (camellia) oil. Traditional shiatsu, acupuncture and moxa therapies, where dried mugwort leaves are burned on certain points of the body, are also part of the experience. The 80-acre Aman Kyoto site comprises 72 acres of permanent forest and eight acres of impeccably kept gardens which play a starring role at the resort and provide an ethereal setting for guided yoga, meditation and forest bathing. Moss-covered boulders glow emerald-like in the lush undergrowth, streams provide a soothing soundtrack and footpaths meander through a landscape of mature cedar, cypress, camellia and Japanese maple trees. Aman chair and CEO Vladislav Doronin says: “Aman Kyoto embodies the true spirit of Aman, blending our profound respect for nature with adherence to simple, yet striking, principles of aesthetics and structure.” Aman Kyoto is owned by global investment firm the Chartered Group, which has been the driving force behind the development and realisation of the project. Doronin concludes: “We look forward to unveiling the many dimensions of Kyoto through the eyes of Aman and sharing the secrets of our enchanting garden.” ● Read more: http://lei.sr/V6B7S