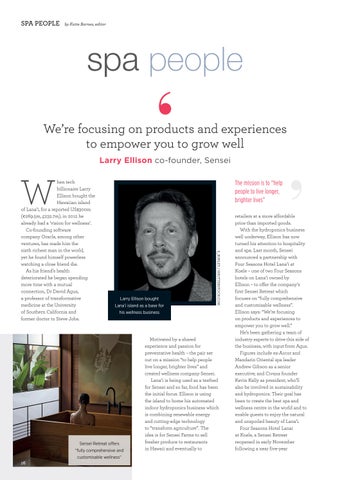 The mission is to “help people to live longer, brighter lives”

hen tech billionaire Larry Ellison bought the Hawaiian island of Lana’i, for a reported US$300m (€269.5m, £232.7m), in 2012 he already had a ‘vision for wellness’. Co-founding software company Oracle, among other ventures, has made him the sixth richest man in the world, yet he found himself powerless watching a close friend die. As his friend’s health deteriorated he began spending more time with a mutual connection, Dr David Agus, a professor of transformative medicine at the University of Southern California and former doctor to Steve Jobs.

Motivated by a shared experience and passion for preventative health – the pair set out on a mission “to help people live longer, brighter lives” and created wellness company Sensei. Lana’i is being used as a testbed for Sensei and so far, food has been the initial focus. Ellison is using the island to home his automated indoor hydroponics business which is combining renewable energy and cutting-edge technology to “transform agriculture”. The idea is for Sensei Farms to sell fresher produce to restaurants in Hawaii and eventually to

retailers at a more affordable price than imported goods. With the hydroponics business well underway, Ellison has now turned his attention to hospitality and spa. Last month, Sensei announced a partnership with Four Seasons Hotel Lana’i at Koele – one of two Four Seasons hotels on Lana’i owned by Ellison – to offer the company’s first Sensei Retreat which focuses on “fully comprehensive and customisable wellness”. Ellison says: “We’re focusing on products and experiences to empower you to grow well.” He’s been gathering a team of industry experts to drive this side of the business, with input from Agus. Figures include ex-Accor and Mandarin Oriental spa leader Andrew Gibson as a senior executive; and Civana founder Kevin Kelly as president, who’ll also be involved in sustainability and hydroponics. Their goal has been to create the best spa and wellness centre in the world and to enable guests to enjoy the natural and unspoiled beauty of Lana’i. Four Seasons Hotel Lanai at Koele, a Sensei Retreat reopened in early November following a near five-year