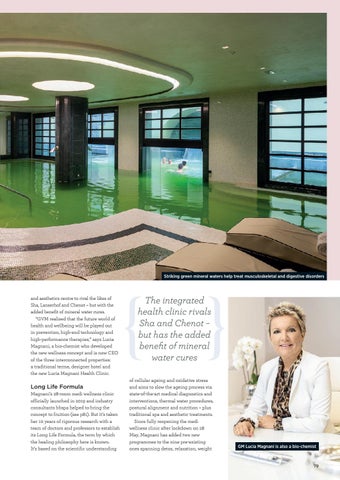 and aesthetics centre to rival the likes of Sha, Lanserhof and Chenot – but with the added benefit of mineral water cures. “GVM realised that the future world of health and wellbeing will be played out in prevention, high-end technology and high-performance therapies,” says Lucia Magnani, a bio-chemist who developed the new wellness concept and is now CEO of the three interconnected properties: a traditional terme, designer hotel and the new Lucia Magnani Health Clinic.

Long Life Formula Magnani’s 28-room medi wellness clinic officially launched in 2019 and industry consultants bbspa helped to bring the concept to fruition (see p81). But it’s taken her 10 years of rigorous research with a team of doctors and professors to establish its Long Life Formula, the term by which the healing philosophy here is known. It’s based on the scientific understanding

The integrated health clinic rivals Sha and Chenot – but has the added benefit of mineral water cures of cellular ageing and oxidative stress and aims to slow the ageing process via state-of-the-art medical diagnostics and interventions, thermal water procedures, postural alignment and nutrition – plus traditional spa and aesthetic treatments. Since fully reopening the medi wellness clinic after lockdown on 28 May, Magnani has added two new programmes to the nine pre-existing ones spanning detox, relaxation, weight