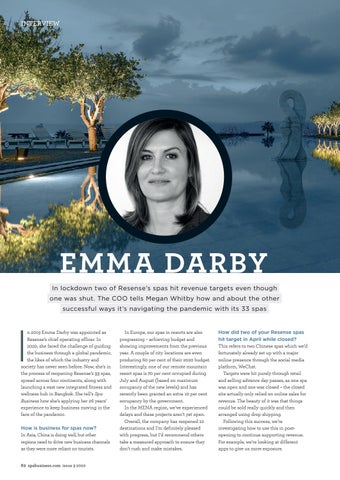 EMMA DARBY In lockdown two of Resense’s spas hit revenue targets even though one was shut. The COO tells Megan Whitby how and about the other successful ways it’s navigating the pandemic with its 33 spas

n 2019 Emma Darby was appointed as Resense’s chief operating officer. In 2020, she faced the challenge of guiding the business through a global pandemic, the likes of which the industry and society has never seen before. Now, she’s in the process of reopening Resense’s 33 spas, spread across four continents, along with launching a vast new integrated fitness and wellness hub in Bangkok. She tell’s Spa Business how she’s applying her 26 years’ experience to keep business moving in the face of the pandemic.

How is business for spas now? In Asia, China is doing well, but other regions need to drive new business channels as they were more reliant on tourists. 62 spabusiness.com issue 3 2020

In Europe, our spas in resorts are also progressing – achieving budget and showing improvements from the previous year. A couple of city locations are even producing 60 per cent of their 2020 budget. Interestingly, one of our remote mountain resort spas is 70 per cent occupied during July and August (based on maximum occupancy of the new levels) and has recently been granted an extra 10 per cent occupancy by the government. In the MENA region, we’ve experienced delays and these projects aren’t yet open. Overall, the company has reopened 22 destinations and I’m definitely pleased with progress, but I’d recommend others take a measured approach to ensure they don’t rush and make mistakes.

How did two of your Resense spas hit target in April while closed? This refers to two Chinese spas which we’d fortunately already set up with a major online presence through the social media platform, WeChat. Targets were hit purely through retail and selling advance day passes, as one spa was open and one was closed – the closed site actually only relied on online sales for revenue. The beauty of it was that things could be sold really quickly and then arranged using drop shipping. Following this success, we’re investigating how to use this in postopening to continue supporting revenue. For example, we’re looking at different apps to give us more exposure.