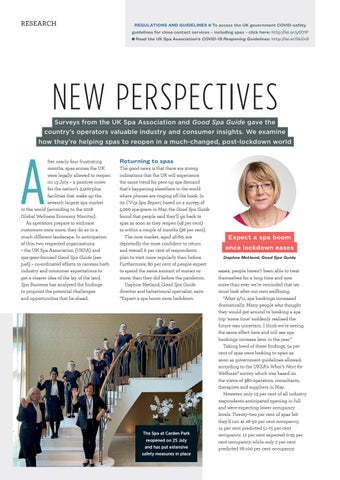 fter nearly four frustrating months, spas across the UK were legally allowed to reopen on 13 July – a positive move for the nation’s 3,500-plus facilities that make up the seventh largest spa market in the world (according to the 2018 Global Wellness Economy Monitor). As operators prepare to embrace customers once more, they do so in a much different landscape. In anticipation of this, two respected organisations – the UK Spa Association (UKSA) and spa-goer-focused Good Spa Guide (see p46) – co-ordinated efforts to canvass both industry and consumer expectations to get a clearer idea of the lay of the land. Spa Business has analysed the findings to pinpoint the potential challenges and opportunities that lie ahead.

Returning to spas The good news is that there are strong indications that the UK will experience the same trend for pent-up spa demand that’s happening elsewhere in the world where phones are ringing off the hook. In its CV-19 Spa Report, based on a survey of 5,000 spa-goers in May, the Good Spa Guide found that people said they’ll go back to spas as soon as they reopen (48 per cent) or within a couple of months (36 per cent). The core market, aged 46-60, are reportedly the most confident to return and overall 6 per cent of respondents plan to visit more regularly than before. Furthermore, 80 per cent of people expect to spend the same amount of money or more, than they did before the pandemic. Daphne Metland, Good Spa Guide director and behavioural specialist, says: “Expect a spa boom once lockdown

eases; people haven’t been able to treat themselves for a long time and now more than ever we’re reminded that we must look after our own wellbeing. “After 9/11, spa bookings increased dramatically. Many people who thought they would get around to booking a spa trip ‘some time’ suddenly realised the future was uncertain. I think we’re seeing the same effect here and will see spa bookings increase later in the year.” Taking heed of these findings, 54 per cent of spas were looking to open as soon as government guidelines allowed, according to the UKSA’s What’s Next for Wellness? survey which was based on the views of 380 operators, consultants, therapists and suppliers in May. However, only 13 per cent of all industry respondents anticipated opening in full and were expecting lower occupancy levels. Twenty-two per cent of spas felt they’d run at 26-50 per cent occupancy, 14 per cent predicted 51-75 per cent occupancy, 12 per cent expected 0-25 per cent occupancy, while only 2 per cent predicted 76-100 per cent occupancy.