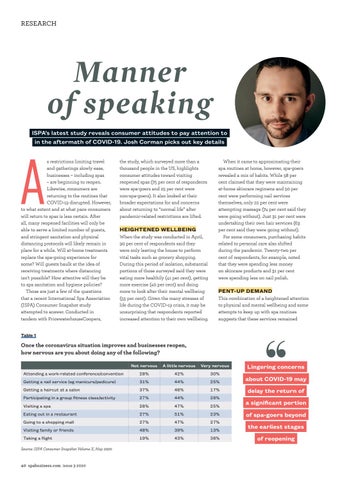 s restrictions limiting travel and gatherings slowly ease, businesses – including spas – are beginning to reopen. Likewise, consumers are returning to the routines that COVID-19 disrupted. However, to what extent and at what pace consumers will return to spas is less certain. After all, many reopened facilities will only be able to serve a limited number of guests, and stringent sanitation and physical distancing protocols will likely remain in place for a while. Will at-home treatments replace the spa-going experience for some? Will guests baulk at the idea of receiving treatments where distancing isn’t possible? How attentive will they be to spa sanitation and hygiene policies? Those are just a few of the questions that a recent International Spa Association (ISPA) Consumer Snapshot study attempted to answer. Conducted in tandem with PricewaterhouseCoopers,

the study, which surveyed more than a thousand people in the US, highlights consumer attitudes toward visiting reopened spas (75 per cent of respondents were spa-goers and 25 per cent were non-spa-goers). It also looked at their broader expectations for and concerns about returning to “normal life” after pandemic-related restrictions are lifted.

HEIGHTENED WELLBEING When the study was conducted in April, 90 per cent of respondents said they were only leaving the house to perform vital tasks such as grocery shopping. During this period of isolation, substantial portions of those surveyed said they were eating more healthily (41 per cent), getting more exercise (40 per cent) and doing more to look after their mental wellbeing (55 per cent). Given the many stresses of life during the COVID-19 crisis, it may be unsurprising that respondents reported increased attention to their own wellbeing.

Once the coronavirus situation improves and businesses reopen, how nervous are you about doing any of the following?

Getting a nail service (eg manicure/pedicure)

Getting a haircut at a salon

delay the return of

Participating in a group fitness class/activity

a significant portion of spa-goers beyond

Eating out in a restaurant

Going to a shopping mall

the earliest stages of reopening