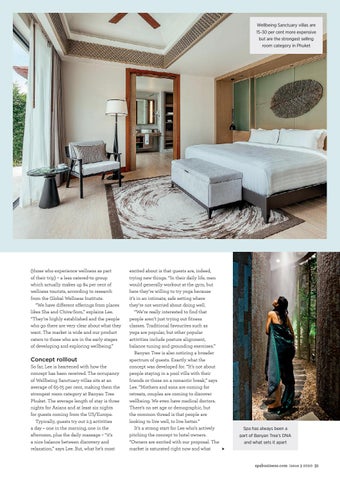 (those who experience wellness as part of their trip) – a less catered-to group which actually makes up 84 per cent of wellness tourists, according to research from the Global Wellness Institute. “We have different offerings from places likes Sha and Chiva-Som,” explains Lee. “They’re highly established and the people who go there are very clear about what they want. The market is wide and our product caters to those who are in the early stages of developing and exploring wellbeing.”

Concept rolllout So far, Lee is heartened with how the concept has been received. The occupancy of Wellbeing Sanctuary villas sits at an average of 65-75 per cent, making them the strongest room category at Banyan Tree Phuket. The average length of stay is three nights for Asians and at least six nights for guests coming from the US/Europe. Typically, guests try out 2.5 activities a day – one in the morning, one in the afternoon, plus the daily massage – “it’s a nice balance between discovery and relaxation,” says Lee. But, what he’s most

excited about is that guests are, indeed, trying new things. “In their daily life, men would generally workout at the gym, but here they’re willing to try yoga because it’s in an intimate, safe setting where they’re not worried about doing well. “We’re really interested to find that people aren’t just trying out fitness classes. Traditional favourites such as yoga are popular, but other popular activities include posture alignment, balance tuning and grounding exercises.” Banyan Tree is also noticing a broader spectrum of guests. Exactly what the concept was developed for. “It’s not about people staying in a pool villa with their friends or those on a romantic break,” says Lee. “Mothers and sons are coming for retreats, couples are coming to discover wellbeing. We even have medical doctors. There’s no set age or demographic, but the common thread is that people are looking to live well, to live better.” It’s a strong start for Lee who’s actively pitching the concept to hotel owners. “Owners are excited with our proposal. The market is saturated right now and what