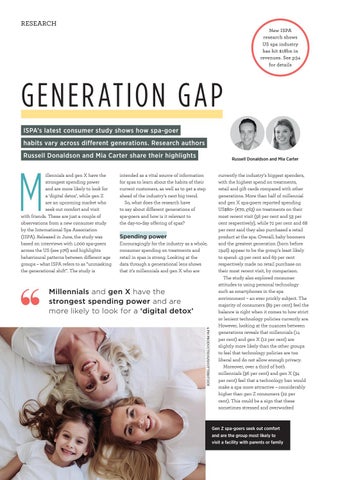 illennials and gen X have the strongest spending power and are more likely to look for a ‘digital detox’, while gen Z are an upcoming market who seek out comfort and visit with friends. These are just a couple of observations from a new consumer study by the International Spa Association (ISPA). Released in June, the study was based on interviews with 1,000 spa-goers across the US (see p76) and highlights behavioural patterns between different age groups – what ISPA refers to as “unmasking the generational shift”. The study is

intended as a vital source of information for spas to learn about the habits of their current customers, as well as to get a step ahead of the industry’s next big trend. So, what does the research have to say about different generations of spa-goers and how is it relevant to the day-to-day offering of spas?

Spending power Encouragingly for the industry as a whole, consumer spending on treatments and retail in spas is strong. Looking at the data through a generational lens shows that it’s millennials and gen X who are

currently the industry’s biggest spenders, with the highest spend on treatments, retail and gift cards compared with other generations. More than half of millennial and gen X spa-goers reported spending US$80+ (€70, £63) on treatments on their most recent visit (56 per cent and 53 per cent respectively), while 72 per cent and 68 per cent said they also purchased a retail product at the spa. Overall, baby boomers and the greatest generation (born before 1946) appear to be the group’s least likely to spend: 43 per cent and 69 per cent respectively made no retail purchase on their most recent visit, by comparison. The study also explored consumer attitudes to using personal technology such as smartphones in the spa environment – an ever prickly subject. The majority of consumers (89 per cent) feel the balance is right when it comes to how strict or lenient technology policies currently are. However, looking at the nuances between generations reveals that millennials (14 per cent) and gen X (12 per cent) are slightly more likely than the other groups to feel that technology policies are too liberal and do not allow enough privacy. Moreover, over a third of both millennials (36 per cent) and gen X (34 per cent) feel that a technology ban would make a spa more attractive – considerably higher than gen Z consumers (22 per cent). This could be a sign that these sometimes stressed and overworked