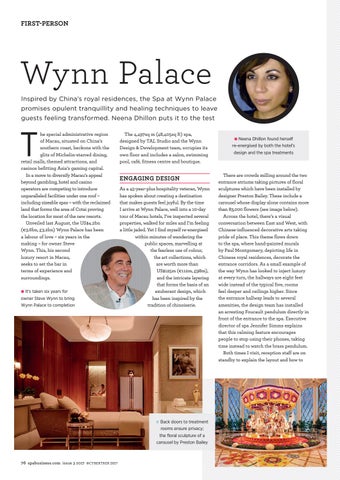 he special administrative region of Macau, situated on China’s southern coast, beckons with the glitz of Michelin-starred dining, retail malls, themed attractions, and casinos befitting Asia’s gaming capital. In a move to diversify Macau’s appeal beyond gambling, hotel and casino operators are competing to introduce unparalleled facilities under one roof – including sizeable spas – with the reclaimed land that forms the area of Cotai proving the location for most of the new resorts. Unveiled last August, the US$4.2bn (€3.6bn, £3.2bn) Wynn Palace has been a labour of love – six years in the making – for owner Steve Wynn. This, his second luxury resort in Macau, seeks to set the bar in terms of experience and surroundings. ● It’s taken six years for

ENGAGING DESIGN As a 45-year-plus hospitality veteran, Wynn has spoken about creating a destination that makes guests feel joyful. By the time I arrive at Wynn Palace, well into a 10-day tour of Macau hotels, I’ve inspected several properties, walked for miles and I’m feeling a little jaded. Yet I find myself re-energised within minutes of wandering the public spaces, marvelling at the fearless use of colour, the art collections, which are worth more than US$125m (€112m, £98m), and the intricate layering that forms the basis of an exuberant design, which has been inspired by the tradition of chinoiserie.

● Back doors to treatment

rooms ensure privacy; the floral sculpture of a carousel by Preston Bailey

There are crowds milling around the two entrance atriums taking pictures of floral sculptures which have been installed by designer Preston Bailey. These include a carousel whose display alone contains more than 83,000 flowers (see image below). Across the hotel, there’s a visual conversation between East and West, with Chinese-influenced decorative arts taking pride of place. This theme flows down to the spa, where hand-painted murals by Paul Montgomery, depicting life in Chinese royal residences, decorate the entrance corridors. As a small example of the way Wynn has looked to inject luxury at every turn, the hallways are eight feet wide instead of the typical five, rooms feel deeper and ceilings higher. Since the entrance hallway leads to several amenities, the design team has installed an arresting Foucault pendulum directly in front of the entrance to the spa. Executive director of spa Jennifer Simms explains that this calming feature encourages people to stop using their phones, taking time instead to watch the brass pendulum. Both times I visit, reception staff are on standby to explain the layout and how to